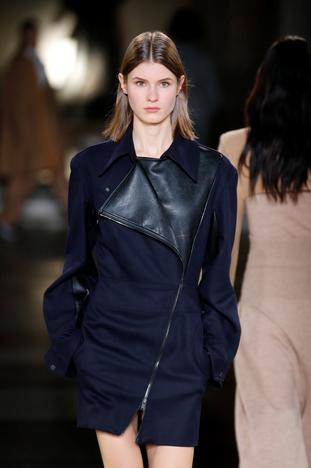 The British fashion designer, known for her sharp tailoring and for mixing luxury and sporty looks, unveiled her autumn/winter 2017-2018 women’s collection which mixed in burgundy, bottle green, sky blue, white and silver.

Her models gave the penultimate day of the show a relaxed but effortlessly elegant vibe in trench-coats and jackets, ultra-wide, high-waisted trousers, all-in-one jumpsuits and overalls, and turtle-neck mini-dresses with super-sized sleeves.

The show, at the Paris Opera, was inspired by “faith. love. energy.” McCartney’s Twitter feed said, with dancing to “Faith” by the late singer George Michael in the finale.

It was watched by a star-studded crowd including Mexican-U.S. actress Salma Hayek and her French businessman husband Francois-Henri Pinault, chief executive of the Kering group, which has a 50 percent stake in Stella McCartney.