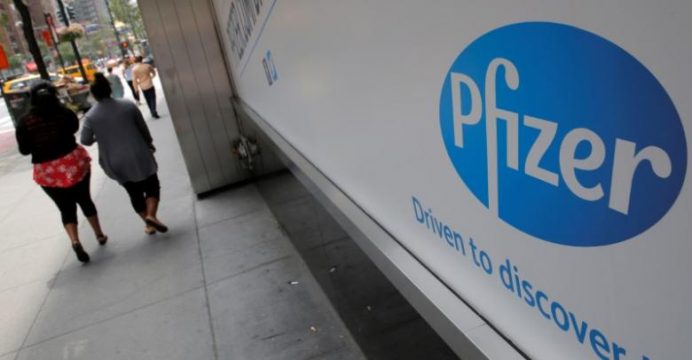 Pfizer Inc’s process for manufacturing contaminated drugs at a plant Kansas was “out of control”, warns FDA

The U.S. Food and Drug Administration said Pfizer Inc’s process for manufacturing sterile injectable drugs at a plant in McPherson, Kansas was “out of control” and put patients at risk, according to a warning letter made public on Tuesday.

In the Feb. 14 letter, the FDA said that several products were contaminated with multiple foreign particulates and that the injectable antibiotic vancomycin had been compromised by cardboard pieces, reports Reuters.

It warned the company it had failed to take corrective action. The presence of the foreign matter is “unacceptable” and suggests “a significant loss of control in your manufacturing process” that represents a “severe risk of harm to patients,” the FDA wrote.

The Pfizer logo is seen at their world headquarters in Manhattan, New York, U.S.

Pfizer said in a statement it has been “diligently implementing commitments made to the FDA” to ensure the agency’s concerns are addressed.

The warning letter followed an investigation that took place between May 16 and June 8, 2016, into the facility in Kansas that Pfizer acquired with its $17 billion deal for Hospira in 2015.

Pfizer said the issues cited in the letter “do not have any impact on products that are currently on the market that was manufactured at the McPherson site.”

The FDA said the company’s investigation into the matter was “inadequate” and said similar manufacturing violations had been found at other facilities in the Hospira network going back several years.