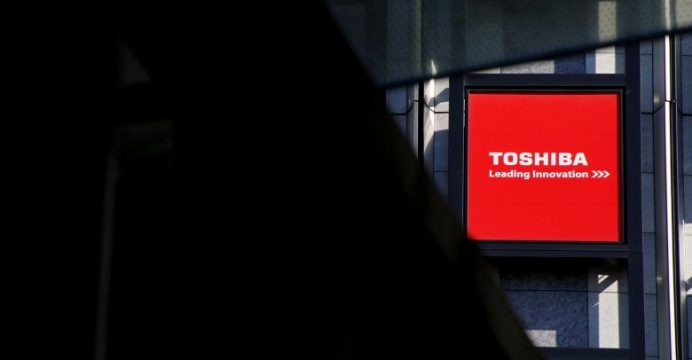 Japan’s Toshiba Corp wants to raise at least 1 trillion yen ($8.8 billion) by selling most of its flash memory chip business, seeking to create a buffer for any fresh financial problems, a source with direct knowledge of the matter said.

The beleaguered conglomerate was pressured to abandon an initial plan to sell just under 20 percent by its main creditor banks which are worried about potential writedowns that may come on top of $6.3 billion hit to its U.S. nuclear unit, financial sources also said.

Toshiba said last week it is now prepared to sell a majority stake or even all of its chip business, the world’s biggest NAND chip producer after Samsung Electronics Co Ltd, also rocked by the emergence of fresh problems at its Westinghouse unit that have delayed the release of earnings, reports Reuters.

The company has not decided on the size of the stake to be sold, preferring to focus on the amount that can be raised but would like to retain a one-third holding as that would give it a degree of control over the business, the source with direct knowledge said.

Its willingness to relinquish so much of the unit underscores not only the depths of its financial woes but also resignation on the part of management to becoming a much smaller company.

The sale “is the best and the only way Toshiba can raise a lot of funds and wipe out concerns about its credit risk,” said the source, adding that the sale should be completed by the end of March next year.

It wants to restart the sale process as soon as possible and may sell to multiple buyers rather than one bidder with interest already received from investment funds, other chipmakers, and client companies, he also said.

A separate person with knowledge of the matter said Toshiba will outline terms of the sale by the end of February, conduct the first round of bids in March and aim to have chosen a preferred bidder or bidders by the end of May. The person also said Toshiba valued the chips business at around 1.5 trillion yen.

A Toshiba spokeswoman said the company cannot comment on the specifics of the sale process. Sources declined to be identified as they were not authorized to speak to the media.

Other potential financial risks that Toshiba may have to deal with include Landis+Gyr AG, an unlisted German meter maker it acquired in 2011 and whose earnings have not matched expectations.

“Toshiba may have to take a write-down (for Landis) of more than 100 billion yen in the current financial year,” an executive at one of Toshiba’s main creditor banks said.

Asked about the potential for a write-down related to Landis at a news conference last week, Toshiba’s Chief Financial Officer Masayoshi Hirata said the company currently did not expect to take a charge.

Another area of concern is a commitment to buy $7.4 billion of liquefied natural gas (LNG) gas over 20 years – a foray into big gas trading that analysts have questioned the merits of.

When Toshiba was offering 19.9 percent of its chip unit, it received bids ranging from 200 billion yen to 400 billion yen ($1.8 billion to $3.5 billion), a source has previously said.