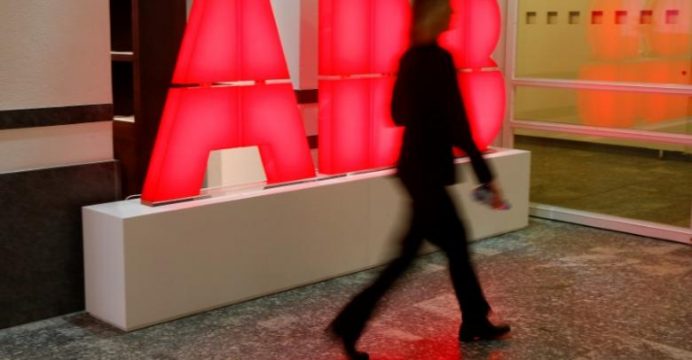 Swiss engineering group ABB revealed the discovery of what it called a “sophisticated criminal scheme” in its South Korean subsidiary on Wednesday, which it expects will result in a $100 million pre-tax charge.

“The entire ABB group – all 132,000 of us – will have to live with the consequences,” Spiesshofer told staff in a letter after the company said it had uncovered significant embezzlement and misappropriation of funds in its South Korean subsidiary.

ABB, which already faces an investigation into suspected bribery and corruption in Britain, has been under shareholder pressure due to a shrinking order book, although Spiesshofer won some breathing space when the firm posted the first uptick in new business in nearly two years in the fourth quarter of 2016.

Separately, ABB said it nominated Lars Forberg, managing director of Cevian Capital, for election to its board. A call by Cevian, ABB’s second-largest shareholder, to spin off its power grids business, was rejected by ABB last year.

The Swiss company said the alleged theft was limited to South Korea, where it employs around 800 people and generated sales of $525 million in 2015.

“The treasurer of the South Korean unit is suspected of forging documentation and colluding with third parties to steal from the company,” ABB said.

The treasurer, named by a source in Korea as Oh Myeong-se, disappeared on Feb. 7 and ABB subsequently discovered significant financial irregularities.

“On February 9 we became aware of suspected financial irregularities in South Korea and we immediately launched an investigation,” ABB spokesman Saswato Das said.

“Given the size of the scheme, the investigation may expand to third parties inside and outside of ABB in South Korea.”

The company’s South Korean subsidiary declined to comment. ABB estimated it would take a pre-tax charge of about $100 million and may delay the publication of its 2016 annual report.

Zuercher Kantonlbank estimated the loss was equivalent to roughly 4 percent of ABB’s 2016 net profit of $1.96 billion and raised questions about corporate governance at ABB.

However, ABB’s stock barely moved on news of the potential charge, with some traders welcoming the nomination of Cevian’s Forberg to the board.