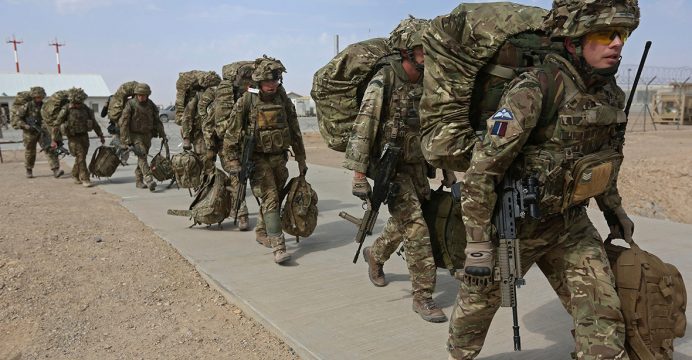 Few Armed Forces personnel seek help for mental health disorders and novel approaches will be needed to encourage personnel at risk of PTSD, anxiety and alcohol abuse to seek treatment.

A trial testing a potential post-deployment screening program for UK Armed Forces personnel, based on a computerized assessment and tailored mental health advice, found it was not effective in reducing symptoms of mental health disorders or encouraging personnel to seek help, compared to the general mental health advice which is the standard of care in the UK military.

This type of screening was tested because it was deemed the most likely way that a UK screening program could be introduced, because there are too few mental health professionals and resources to carry out face-to-face appraisals.

The trial, published in The Lancet, suggests that other approaches to encourage personnel with mental health disorders such as post-traumatic stress disorder (PTSD), anxiety, depression or alcohol abuse to seek help will be needed.

In the UK, mental health support and treatment for Armed Forces personnel consists of psychoeducational briefings, peer support programs to assist with traumatic stress, decompression before returning home from deployment and clinical services comprising a mixture of uniformed and civilian healthcare professionals. However, approximately half of military personnel with a probable mental health disorder do not seek help. Additionally many delay seeking help or do not finish treatment.

Screening has therefore been proposed as a way to identify those at risk of mental health problems on return from deployment and prompt them to seek help. Various forms of post-deployment screening exist and are used in the US, Canada, Australia and the Netherlands.

In the study, led by King’s Centre for Military Health Research at King’s College London (UK), researchers aimed to assess the effectiveness of a particular type of screening. On return from deployment, all 10190 personnel involved in the trial were asked to complete a computerized mental health assessment.

Personnel in the screening group were then offered the opportunity to view tailored mental health advice based on their likelihood of having a mental health disorder. If they agreed, they were told what mental health issue they probably had and were urged to seek help by speaking either to a unit welfare officer (for moderate symptoms), a medical officer (more severe symptoms) or told that no professional support was needed if no risk was identified.

Personnel in the control group were offered the general mental health advice offered in the UK military—as they would have been if they had not undergone screening. They were told that there were many ways to seek help and were given examples of support provided. All participants were then followed up between 10 and 24 months later.

At follow-up, there were no significant differences between the two groups in terms of the prevalence of PTSD (11%), depression or anxiety (6%) and alcohol abuse (12%) (table 4). There was also no difference in the rate of health seeking or pharmaceutical use between the two groups, with 12% (496/3996) of personnel in the screening group using a mental health service in the follow-up period, compared to 13% (318/2369) in the control group (table 5).

At follow-up, about a third of personnel who had probable PTSD, depression or anxiety (excluding alcohol misuse) at the start of the study had sought mental health care over the past 12 months, with no difference between the control and screening groups (35.8% (53/148) in the control group vs. 32.9% (82/249) in the screening group) (appx p.5). Help-seeking behavior among personnel with probable PTSD, depression or anxiety was similar irrespective of whether personnel chose to view the tailored advice or not.

The authors note that the findings from the trial may not be entirely generalizable to other screening programs because other programs use approaches such as repeated assessments over time, or face-to-face interviews (as is the case in the US screening program).

“Understandably, military forces are keen to protect the mental health of their personnel who carry out highly challenging duties on behalf of their countries. The question is what can be done to make a positive difference by protecting the mental health of personnel and decreasing the burden of mental illness on individuals, their families and UK society as a whole. More research is needed to improve the mental health of UK Armed Forces personnel and other approaches could include good leadership training, peer and family support programs and further improving the quality and accessibility of military mental health services,” says co-author Professor Neil Greenberg, King’s College London.

Writing in a linked Comment, Dr Alexander C McFarlane, University of Adelaide, Australia, notes that “a potential confounding issue with this study design is the fact that by filling in the self-report measures, both groups had the opportunity to reflect on their obvious levels of symptomatic distress… which might have minimised the ability to find differences between groups.”

He also highlights the importance of ensuring adequate care is available when personnel do seek help: “Even if an individual did present to mental health services in the UK military as part of (this) study, this did not guarantee that an evidence-based intervention was offered, even when a general practitioner was consulted.”