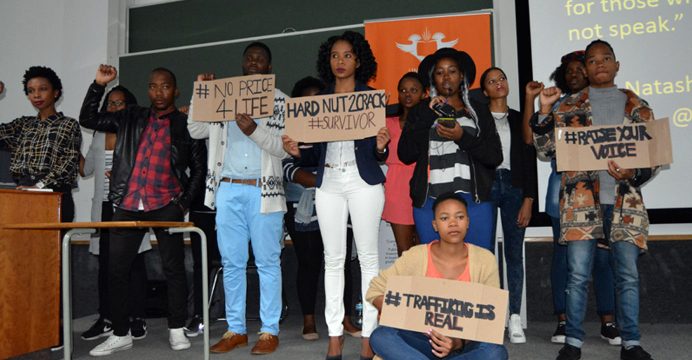 IOM and the University of Johannesburg (UJ) held an awards ceremony last week at the UJ campus to commend students’ work on a 2016 social media campaign to combat human trafficking.

The pictures were then used together with messages as part of a social media campaign on Facebook and Twitter launched during Human Trafficking Awareness Week (3-7 October 2016).

Addressing the students at the awards ceremony, IOM South Africa Chief of Mission Richard Ots said: “The campaign which you directed, produced and crafted for us was a huge success. IOM is now sharing it with other missions as an example of an innovative way to raise public awareness of human trafficking.”

Professor Sonja Verwey, Head of UJ’s School of Communication, said: “The campaign forced them to confront themselves and see their role in the world. Communication is a social science and it’s our duty to teach students to deal with social issues like this.”

Globally human trafficking is believed to be the third most profitable illegal trade after drugs and weapons. Trafficking victims are often subjected to rape, torture, debt bondage, unlawful confinement and threats against their family or other people close to them, as well as other forms of violence.