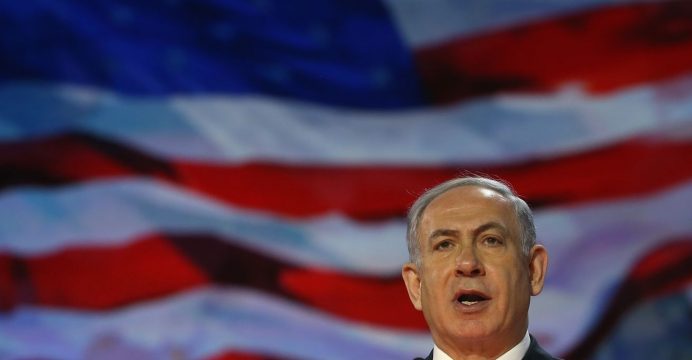 Prime Minister Benjamin Netanyahu’s far-right political allies hailed on Thursday a shift in U.S. support for a Palestinian state and shrugged off a call by President Donald Trump to curb Israeli settlements on occupied land.

In his first face-to-face meeting with Netanyahu as president, Trump on Wednesday dropped a U.S. commitment to a two-state solution to the Israeli-Palestinian conflict, the longstanding bedrock of Washington’s Middle East policy.

The Republican president said he would accept whatever peace solution the Israelis or Palestinians chose, whether it entailed two states or one. “I can live with either one,” said Trump.

The ultranationalist Jewish Home party in Netanyahu’s coalition claimed some of the credit for the shift, reports Reuters.

“What we did … definitely helped change the picture,” Justice Minister Ayelet Shaked of Jewish Home said on Army Radio, referring to its pressure on Netanyahu ahead of his trip.

Party leader Naftali Bennett, an advocate of annexing parts of the occupied West Bank the Palestinians want in any future state, was equally upbeat in comments on Facebook.

“The Palestinian flag has been lowered and replaced by the Israeli flag,” said Bennett, who is battling Netanyahu for right-wing voters but whose party is crucial for the cohesion of the governing coalition.

NETANYAHU GOT “WHAT HE WANTED”

Before Netanyahu’s trip, Bennett had said on Facebook “the earth will shake” if the prime minister used the words “two states” or “Palestine” in Washington. And he didn’t.

Netanyahu, who first conditionally backed Palestinian statehood in 2009, did not explicitly rule out a homeland for the Palestinians during his talks with Trump but he meticulously avoided using the term “two-state” in his remarks.

Political commentator Sima Kadmon, writing in Israel’s Yedioth Ahronoth newspaper, said right-wingers had every reason to cheer but added that Netanyahu’s arm had needed no twisting when it came to Palestinian statehood.

“Netanyahu received exactly what he wanted from the American president. One state, two states — what difference does it make? That is precisely the attitude Netanyahu wanted to see from the president – someone who doesn’t have the foggiest clue what he is talking about,” she said.

By contrast, Palestinians voiced alarm at the change in U.S. tone. In a statement, President Mahmoud Abbas reiterated his commitment to a two-state solution and demanded a halt to settlement expansion.

In the radio interview, Shaked played down Trump’s surprise call on Netanyahu to “hold back on settlements for a bit”, suggesting it was not a precise demand for a total freeze.

In a statement this month welcomed by Israeli officials, the White House reversed a long-standing policy of condemning building on occupied land, though it also said building new settlements or expanding existing ones may not be helpful in achieving peace.

Since Trump took office on Jan. 20, Israel has announced plans for almost 6,000 more settlement homes in the West Bank and East Jerusalem, drawing European and Palestinian condemnation but none from the White House.