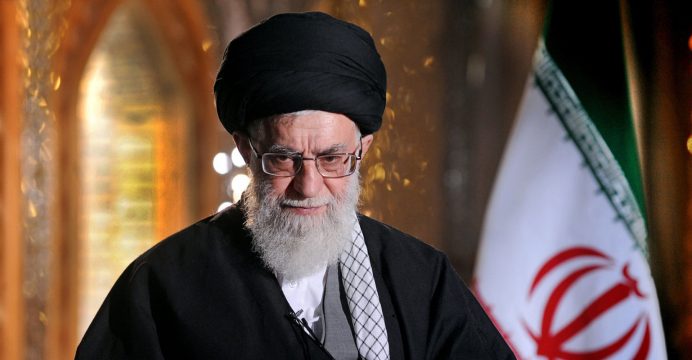 Ayatollah Khamenei criticizes Iran’s president on economy ahead of vote

Iran’s president must do more to improve the economy, Ayatollah Ali Khamenei said on Wednesday in a rare public criticism from the supreme leader three months before Hassan Rouhani runs for re-election.

Unemployment, recession and inflation – issues that could win or lose an election – all remain major problems in the final month’s of Rouhani’s first four-year term, Khamenei said in a speech, according to the state broadcaster’s website, reports Reuters.

Rouhani, who secured relief from economic sanctions in exchange for checks on Iran’s nuclear program, may face a hardline candidate in May’s election who could swing the Islamic Republic back away from such international engagement for which Khamenei has never expressed huge enthusiasm.

“I have asked the honorable president to advise his executive managers that management must take place with transparency, supervision and follow-up,” Khamenei said.

“Otherwise if managers say ‘This should take place’ and another person says ‘Of course’ there will be no progress and no visible work will get done.”

Rouhani is likely to run a campaign highlighting the economic benefits of the nuclear deal which opened Iran to international investment that had been lacking for years due to sanctions.

Many Iranians, however, say the benefits have yet to trickle down to them and any gains could be at risk due to President Donald Trump’s dislike of the deal as well as U.S. rhetoric that hints at some kind of military confrontation.

Khamenei’s comments could give hardliners, who have not yet named an election candidate, a green light to more harshly criticize Rouhani.

In the speech, Khamenei also said calls for national reconciliation were “meaningless”, a reference to comments by former reformist Mohammad Khatami who said the country should unite in the face of a hostile Trump administration.