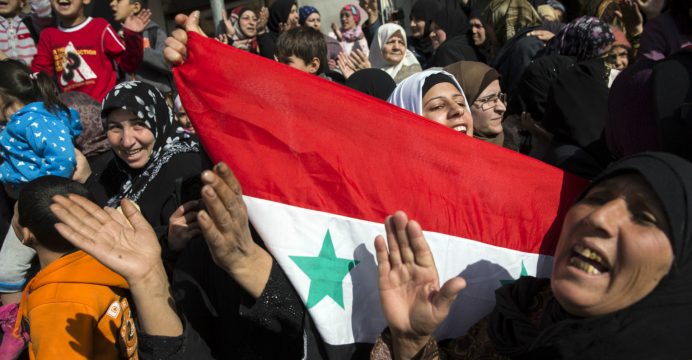 The main Syrian opposition body said on Wednesday it wanted face-to-face negotiations with the Damascus government about a political transition at peace talks that are due to begin in Geneva next week.

Salim al-Muslit, spokesman of the High Negotiations Committee (HNC), also told Reuters the opposition was sticking to its position that President Bashar al-Assad can have no role in the transition, saying “the heavy price paid by the Syrian people” would have been wasted if he remained in power, reports Reuters.

Russia, Assad’s most powerful ally, has sought to revive diplomacy since its air force helped to defeat rebels in Aleppo in December, the Syrian leader’s biggest victory to date. Nearly six years into the war, Assad seems militarily unassailable thanks to the decisive backing of Russia and Iran.

Muslit said the HNC, which includes rebel groups and political opponents of Assad, wanted to start the negotiations by discussing a governing body to oversee the transition.

Assad has previously ruled out that idea.

“We want direct negotiations, we want to save time, we want a quick end to the suffering of the Syrian people,” said Muslit. But he said the opposition had yet to receive an agenda for the talks, which are due to begin on Feb. 23 following preliminary meetings beginning on Feb. 20.

Disputes over the agenda have helped to torpedo previous rounds of Syria peace talks.

U.N. Syria envoy Staffan de Mistura, speaking in Italy, said he would apply the agenda laid out in a U.N. Security Council resolution aimed at ending the conflict.

This is based on three main points – establishing a new form of governance, coming up with a new constitution and early elections under U.N. supervision, he said.

“That is the agenda and we will not change it, otherwise we open up a Pandora’s box,” said de Mistura, whose attempts to apply the same agenda to talks last year drew a sharp rebuke from Damascus.

The Syrian government should realize that the Geneva talks will not be “about procedures but about the future of Syria”, de Mistura added.

Turkey, which has been a major supporter of the rebellion against Assad, has jointly brokered with Russia a ceasefire to pave the way for the talks.

Despite the ceasefire, Muslit said Assad and his allies were “still carrying out crimes” and he accused them of preparing a major assault against the rebel-held Ghouta region to the east of Damascus.

He was referring to the Geneva communique of 2012 calling for the establishment of a transitional governing body with full executive powers that could include members of the present government, the opposition and other groups. The communique said it should be formed on the basis of mutual consent.

While diplomacy has failed, the Syrian government has been working to conclude local agreements to pacify rebellious areas, typically after insurgents have been defeated.