The memorial segments were decidedly different in tone and delivery, accounting for two of the emotional highlights during the 3 1/2-hour-plus live CBS broadcast from the Staples Center in Los Angeles.

The Prince tribute was a raucous, dance-filled celebration capped by Bruno Mars, clad in a sequined purple jacket and white scarf playing “Let’s Go Crazy,” a signature hit of his late musical hero. Former Prince collaborators Morris Day & the Time preceded Mars with an equally energetic performance of two songs co-written by their one-time associate – “Jungle Love” and “The Bird.” 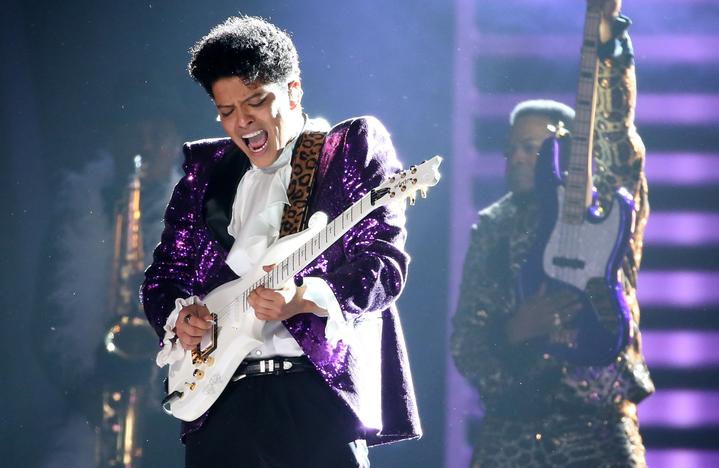 Earlier in the evening, Adele paid homage to Michael in a delicately rendered, somber version of his 1996 dance tune “Fastlove,” which she sang as video clips of her fellow British singer-songwriter flashed on a large screen.

Her salute got off to a rocky start, however. She stumbled in the opening chords, paused and cursed, asking to start again. The flub, and the bleeped profanity, marked a rare misstep for a singer known for flawless vocal performances. She was visibly upset at the end of the song, her eyes welling with tears, but the star-studded audience inside the Staples Center gave her a standing ovation.