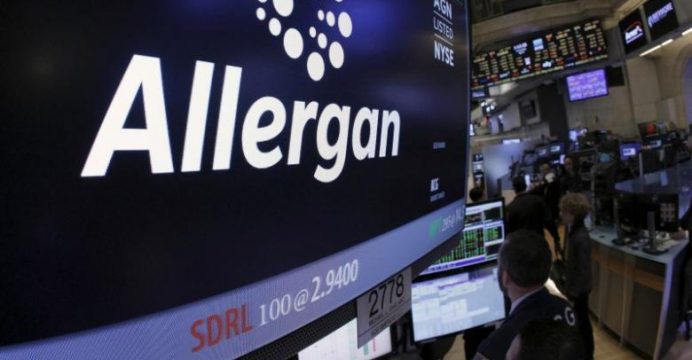 The beat was also driven by demand for its constipation medicine Linzess that more than made up for declining sales of older drugs, such as its Alzheimer’s dementia treatment Namenda and Asacol for ulcerative colitis, reports Reuters.

Chief Executive Brent Saunders, one of the industry’s most active dealmakers, took the blame for the company’s third-quarter profit miss, citing unanticipated declines in sales of Allergan’s older medicines.

The Allergan logo is seen in this photo illustration in Singapore

Allergan, which in September pledged to limit drug price increases to 10 percent, said it had raised the price of certain U.S. branded products by 6.7 percent, on average, effective January.

Net price increases on its U.S. products averaged 4.8 percent in 2016, the company said. Net loss attributable to ordinary shareholders narrowed to $70.2 million, or 20 cents per share, in the fourth-quarter ended Dec. 31, from $700.5 million, or $1.78 per share, a year earlier. Excluding items, the company earned $3.90 per share, handily beating the average estimate by 14 cents.