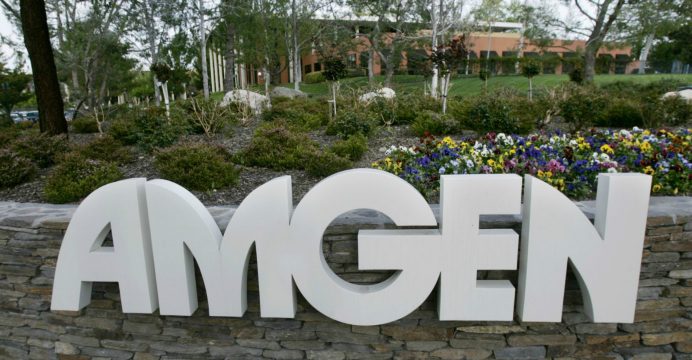 Amgen Inc said its potent cholesterol fighter Repatha significantly reduced the risk of heart attacks, strokes and death in patients with heart disease, according to initial results of a large, eagerly-anticipated trial released on Thursday.

The data should pave the way for greater acceptance by health insurers and pharmacy benefit managers, who have been rejecting about 75 percent of prescriptions written for the expensive medicine despite multiple appeals by physicians, reports Reuters.

No new safety problems cropped up in the 27,500 patient study called Fourier, Amgen said. It also said Repatha’s effect on mental function was similar to placebo, likely alleviating concerns that it might impair cognition in some patients.

An Amgen sign is seen at the company’s office in South San Francisco, California

The trial was widely expected to be positive, especially after a smaller study presented in November showed Repatha therapy led to regression of artery-clogging plaque, an underlying cause of heart disease.

“These results show unequivocally the connection between lowering LDL cholesterol with Repatha and cardiovascular risk reduction, even in a population already treated with optimized statin therapy,” Amgen research chief Sean Harper said in a statement.

Details on the magnitude of benefit will be revealed in mid-March at the American College of Cardiology meeting in Washington, D.C. Industry analysts have been looking for a 15 percent to 20 percent reduction of major adverse heart events.

Repatha, with a list price of more than $14,000 a year, was approved based on its ability to dramatically lower “bad” LDL cholesterol in patients who require more intensive therapy on top of widely-used statins, such as Lipitor, or who are unable to tolerate statins.

But those who control budgets wanted concrete proof that the drug could actually reduce the risk of heart attacks and death before making it easier for patients to get the medicine.

Repatha and a rival drug from Regeneron Corp and Sanofi have had endured anemic sales as a result. Amgen reported just $40 million in third-quarter sales. The company said Repatha would be well on its way to becoming a $1 billion seller if all prescriptions were written had been filled.

The primary and secondary goals of the study are composites of several adverse outcomes. At the heart meeting in March, researchers will also provide details on risk reduction for each of the components, such as non-fatal heart attack, non-fatal stroke, and heart-related death.