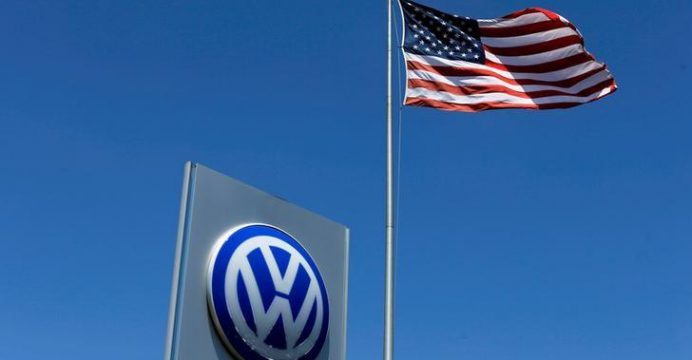 Volkswagen could be forced to pay up to $4.04 billion if regulators don’t approve fixes for all vehicles. In December, VW said it had agreed to buy back 20,000 vehicles and expected to win approval to fix another 60,000.

The settlement is the last major hurdle to Volkswagen moving beyond the scandal over its installation of secret software in hundreds of thousands of U.S. diesel cars to cheat exhaust emissions tests, although it still faces suits from some U.S. states and investors.

An American flag flies next to a Volkswagen car dealership in San Diego, California

Volkswagen has already announced 18.2 billion euros ($19.63 billion) of provisions to cover the costs of “Dieselgate” and a source familiar with the matter said last month that its total bill was likely to remain below 20 billion euros.

Volkswagen’s luxury car unit Audi said on Wednesday it was reviewing whether it needed to put aside more provisions to cover the costs of a U.S. settlement of the scandal, on top of the 980 million euros it already set aside.

“We are using the court documents to review what we still need to set aside for the annual accounts,” an Audi spokesman said in Germany.

Under the VW settlement that must be approved by a U.S. judge, owners of 3.0 liter vehicles who opt for fixes will get compensation of between $7,000 and $16,000 from Volkswagen if emissions fixes are approved in a timely fashion — and the automaker will pay another $500 if the fix affects a vehicle’s performance. Owners who opt for a buyback will get $7,500 on top of the value of the vehicle.

Volkswagen Group of America chief executive Hinrich Woebcken said, with the agreement, all owners of polluting diesel “will have a resolution available to them. We will continue to work to earn back the trust of all our stakeholders.”

VW previously agreed to spend up to $10.03 billion to buy back up to 475,000 polluting 2.0-liter vehicles after it admitted it installed secret software to evade emissions controls. The settlement marked the largest ever automotive buyback offer in U.S. history and costliest auto industry scandal.

Bosch said in a statement it didn’t admit wrongdoing or accept liability but had decided to settle so it could focus on an extensive “transformation process” the company has embarked on.

A federal judge in San Francisco will hold a Feb. 14 hearing on whether to grant preliminary approval for the settlements.

The lead lawyer for the vehicle owners, Elizabeth Cabraser, said in a statement the settlement provides “substantial benefits to both consumers and the environment.”

The automaker is set to plead guilty on Feb. 24 in Detroit to three felony counts as part of a plea agreement with the U.S. Justice Department to resolve charges it installed secret software in U.S. vehicles to allow them to emit up to 40 times the amount of legally permitted pollution.

As part of a $4.3 billion settlement with U.S. regulators, the German automaker has agreed to sweeping reforms, new audits and oversight by an independent monitor for three years to resolve diesel emissions-cheating investigations.

The United States has also charged seven current and former VW executives with wrongdoing. In total, VW has now agreed to spend up to $25 billion in the United States to address claims from owners, environmental regulators, U.S. states and dealers, and offered to buy back about 500,000 polluting vehicles.