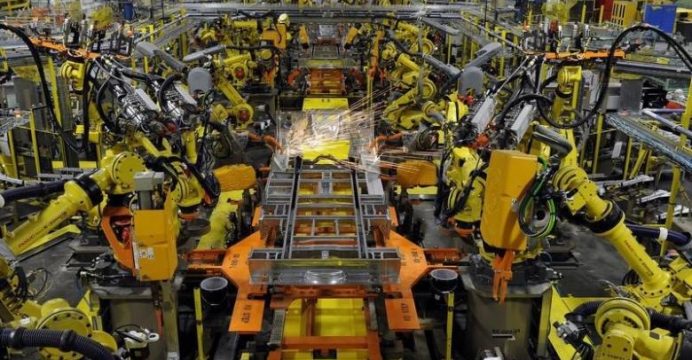 U.S. factory activity accelerated to more than a two-year high in January amid sustained increases in new orders and raw material costs, pointing to a recovery in manufacturing as domestic demand strengthens and the drag from low oil prices ebbs.

Other data on Wednesday showed private employers boosted hiring last month. While construction spending slipped in December, the underlying trend remained strong. The signs of momentum in the economy at the start of the year came as Federal Reserve officials resumed their two-day policy meeting, reports Reuters.

The U.S. central bank, which has forecast three rate hikes this year, is not expected to raise rates when the meeting ends later on Wednesday. The Fed hiked its benchmark overnight interest rate in December to a range of 0.50 percent to 0.75 percent.

The Institute for Supply Management (ISM) said its index of national factory activity increased 1.5 percentage points to a reading of 56.0 last month, the highest since November 2014.

A reading above 50 indicates an expansion in manufacturing, which accounts for about 12 percent of the U.S. economy. Some of the increase likely reflects a surge in business confidence following last November’s election of Donald Trump as president.

Trump has pledged to cut taxes and reduce regulations. The business mogul-turned-politician, who was sworn in as president on Jan. 20, is yet to offer more details about the proposed fiscal stimulus package.

Manufacturers reported paying more for raw materials, which suggests producer inflation could accelerate in coming months. The ISM’s prices index increased 3.5 percentage points in January to its highest level since May 2011.

A collapse in oil prices in 2015 and a surge in the dollar weighed on manufacturing for much of last year, with most of the pain coming through sharp cutbacks in business spending on equipment. Oil prices have since risen above $50 per barrel, lifting some of the fog off manufacturing.

The government reported last Friday that business spending on equipment increased at a 3.1 percent annualized rate in the fourth quarter, the first rise in over a year.

January’s data so far suggests that the economy is poised for an acceleration after gross domestic product increased at a 1.9 percent annualized rate in the fourth quarter. The deceleration from the third quarter’s brisk 3.5 percent pace reflected a wider trade deficit.

Separately on Wednesday, the ADP National Employment Report showed private employers added 246,000 jobs in January, up from 151,000 in December. The report, jointly developed with Moody’s Analytics, come ahead of the Labor Department’s more comprehensive non-farm payrolls report on Friday, which includes both public- and private-sector employment.

Economists polled by Reuters are looking for private payroll employment to have grown by 169,000 jobs in January, up from 144,000 the month before. Total non-farm employment is expected to have climbed by 175,000.

The dollar rose to a session high against the euro, while prices for U.S. government bonds fell. U.S. stocks were trading higher.

In December, spending on private construction projects gained 0.2 percent, reaching its highest level since July 2006. It was boosted by a 0.5 percent increase in spending on residential projects. Investment in private nonresidential structures was unchanged after shooting up 0.8 percent the prior month.

Public construction spending dropped 1.7 percent in December. The drop, which was the largest since July, followed four straight monthly increase.