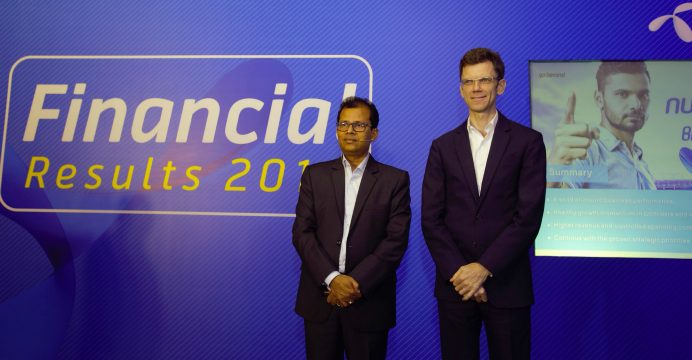 Grameenphone Ltd. reported revenue of BDT 114.9 billion for 2016, up 9.6% from last year. Subscription and traffic revenue (excluding interconnection) grew by 12.0% with growing contribution from data. Data revenue grew by 69.7% with 56.1% growth in user and 167.9% growth in volume.

Voice revenue also grew by 5.1% with healthy development of minutes of usage. During the 4th quarter, subscription and traffic revenue (excluding interconnection) grew by 12.2% compared to that of 2015.

Grameenphone ended the year with 58.0 million active subscribers, registering a 2.2% growth. Grameenphone also acquired 8.8 million internet users during the period. With this, 42.3% of total subscribers are using Grameenphone internet services.

“2016 has been a solid year for Grameenphone with encouraging all-round business performance. Data revenue continued its growth momentum and the dominant voice segment also experienced growth. During the year, we also completed the biometric verification successfully and rolled out 90% of sites with 3G capability,” said Petter Furberg, CEO of Grameenphone Ltd.

He added, “Going forward we will continue with the proven strategic priorities that we outlined a year ago and create value for our honorable shareholders.”

Net profit after taxes for 2016 was BDT 22.5 billion compared to BDT 19.7 billion of 2015. Higher revenue and controlled operating expenditure led to a healthy EBITDA (before other items) of BDT 63.8 billion with improved 55.3% margin. Earnings per share (EPS) for the year stood at BDT 16.68.

“Grameenphone secured strong 14.3% earnings growth from solid top line and operational efficiency initiatives. Against 9.6% revenue growth, operating expenditure grew by 6.5% despite significant network expansion. EBITDA (before other items) grew by 13.8% with 2.0 percentage points margin improvement”, said Dilip Pal, CFO of Grameenphone Ltd. He added, “We believe, potential growth and operating efficiencies will help us to drive future profitability for the company. We are also happy to announce that the Board of Directors has recommended a final dividend of BDT 9 per share for our honorable shareholders.”

He added, “We believe, potential growth and operating efficiencies will help us to drive future profitability for the company. We are also happy to announce that the Board of Directors has recommended a final dividend of BDT 9 per share for our honorable shareholders.”

GP invested BDT 21.1 billion during the year in rolling out 3G sites, 2G coverage, capacity enhancement for catering higher volume of data and voice as well as enhancement of IT infrastructure for better product and service offerings. Meanwhile, GP, the largest contributor to exchequer paid BDT 58.6 billion, comprising 51.0% of total revenue to the national exchequer during the year in the form of taxes, VAT, duties and license fees.

The Board of Directors of Grameenphone Ltd. have recommended final dividend for the year 2016 in cash at the rate of 90% of the paid-up capital (i.e. BDT 9 per share of BDT 10 each) based on the decision taken at the Board Meeting held on 31 January 2017.

With this, the total cash dividend stands at 175% of paid up capital which represents 105% of Profit After Tax for the year 2016 (including 85% interim cash dividend). The Shareholders as of the record date of 22 February 2017 will be entitled for this final dividend, which is subject to the Shareholders’ approval at the 20th AGM to be held on 20 April 2017.