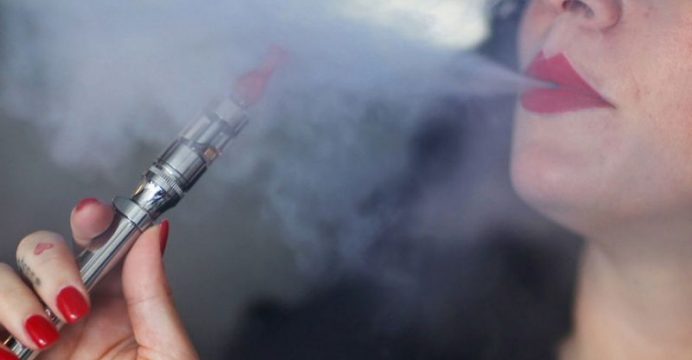 E-cigarettes aren’t tied to a decline in teen smoking

E-cigarettes aren’t tied to a decline in teen smoking and the devices may actually entice some youth who are unlikely to try traditional cigarettes, a U.S. study suggests.

Youth smoking has steadily declined over the past decade, with no steeper decrease after e-cigarettes debuted on the U.S. market in 2007, researchers report in Pediatrics, reports Reuters.

“There is strong evidence in adults, together with some, but more limited evidence in youth, that e-cigarettes are associated with less, not more quitting cigarettes,” said study co-author Dr. Stanton Glantz, director of the Center for Tobacco Control Research and Education at the University of California, San Francisco.

A man smokes an electronic cigarette vaporizer, also known as an e-cigarette, in Toronto

Big U.S. tobacco companies are all developing e-cigarettes, battery-powered gadgets with a heating element that turns liquid nicotine and flavorings into a cloud of vapor that users inhale.

For the past decade, public health experts have debated whether the gadgets might help with smoking cessation or at least be a safer alternative to smoking traditional combustible cigarettes, or whether they might lure a new generation into nicotine addiction.

In the current study, researchers analyzed survey data collected from more than 140,000 middle and high school students between 2004 and 2014.

During the study period, the overall percentages of teens who reported any smoking decreased from 40 percent to 22 percent.

The proportion of youth who identified themselves as current smokers dropped from 16 percent to about 6 percent during the same period.

But teen cigarette smoking rates did not decline faster after the arrival of e-cigarettes in the U.S. between 2007 and 2009.

Researchers also looked at characteristics that might make teens more at risk for smoking, such as living with a smoker or wearing clothing with tobacco products or logos.

While teen cigarette smokers in the study often appeared to fit this profile, adolescents who used only e-cigarettes didn’t display these risk factors.

E-cigarettes aren’t tied to a decline in teen smoking and the devices may actually entice some youth who are unlikely to try traditional cigarettes, a U.S. study suggests.

This suggests that at least some low-risk youth might not be using nicotine products if e-cigarettes were not an option, the authors conclude.

The study isn’t a controlled experiment designed to test whether e-cigarette use directly impacts smoking regular cigarettes, the authors note. Researchers also lacked data on teens who dropped out of school, who might have higher rate of tobacco use than youth still attending school.

Even so, this is now the eighth long-term study to suggest teens who use e-cigarettes are more likely to start smoking, said Dr. Thomas Wills, interim director of the Cancer Prevention and Control Program at the University of Hawaii Cancer in Honolulu.

“E-cigarette advocates have tried to argue that this is only because those teens who used e-cigarettes were high-risk people who were going to smoke anyway and their e-cigarette use had nothing to do with this,” Wills, author of an accompanying editorial, said by email.