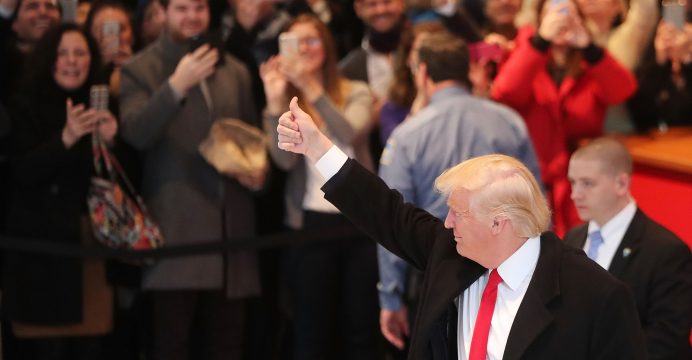 The White House vowed on Sunday to fight the news media “tooth and nail” over what it sees as unfair attacks, with a top adviser saying the Trump administration had presented “alternative facts” to counter low inauguration crowd estimates.

On his first full day as president, Trump said he had a “running war” with the media and accused journalists of underestimating the number of people who turned out Friday for his swearing-in, reports Reuters.

White House officials made clear no truce was on the horizon on Sunday in television interviews that set a much harsher tone in the traditionally adversarial relationship between the White House and the press corps.

“The point is not the crowd size. The point is the attacks and the attempt to delegitimize this president in one day. And we’re not going to sit around and take it,” Chief of Staff Reince Priebus said on “Fox News Sunday.”

The sparring with the media has dominated Trump’s first weekend in office, eclipsing debate over policy and Cabinet appointments.

It was the main theme at the Republican president’s first visit to the CIA, at the press secretary’s first media briefing and in senior officials’ first appearances on the Sunday talk shows.

Together, they made clear the administration will continue to take an aggressive stance with news organizations covering Trump.

“We’re going to fight back tooth and nail every day and twice on Sunday,” Priebus said.

He repeated White House press secretary Sean Spicer’s assertions on Saturday that the media manipulated photographs of the National Mall to make the crowds on Friday look smaller than they really were.