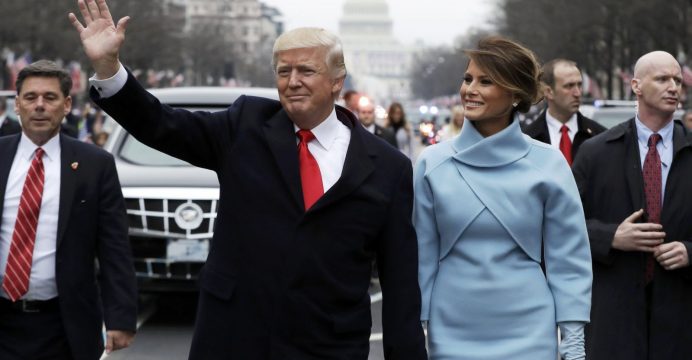 Mexico’s president said on Friday he wanted to strengthen relations with his new U.S. counterpart Donald Trump, whose threats and barbs against the country raised fears of a major economic crisis, and battered its currency.

President Enrique Pena Nieto, pilloried at home for meeting Trump in August after the New York businessman called Mexican migrants rapists and murderers, said on Twitter he would defend the interests of Mexico and its people in a “respectful” dialogue, reports Reuters.

“We will work to strengthen our relationship with shared responsibility,” said Pena Nieto, who likened Trump’s rise to the ascent of Adolf Hitler and Benito Mussolini after the American’s broadsides early in the election campaign.

Trump vowed to build a wall along the U.S. southern border to keep Mexicans out and threatened to tear up a joint trade deal if he cannot recast it in favor of the United States.

The White House website said on Friday that Trump was committed to renegotiating the North American Free Trade Agreement (NAFTA), which underpins Mexico’s economy, and would move to withdraw if no “fair deal” is forthcoming.

The delegation will be led by Foreign Minister Luis Videgaray, who said in an interview late on Friday that he will meet with senior White House aides as well as newly-confirmed U.S. Homeland Security Secretary Gen. John Kelly.

Videgaray pledged to “negotiate without fear” and said he will work to ensure that remittances sent from Mexicans living in the United States to relatives back home are protected from any seizure.

Trump’s inauguration was marked by subdued protests across Mexico. One political activist on Mexico City’s main thoroughfare held up a banner declaring “Racist, gringo Trump…son of Satan, you are a danger to the world.”

More than three-quarters of Mexicans hold a bad or very bad opinion of Trump, according to a poll of 600 people by polling firm Gabinete de Comunicacion Estrategica (GCE).

Trump has threatened to slap hefty tariffs on Mexican-made goods, sending the peso to a string of historic lows against the dollar. Concern about him is widespread.

“Trump if you are Christian, don’t crucify Mexicans,” migrant activist Sergio Tamay wrote on a fuschia-colored sign at a migrant protest in the northern border city of Mexicali.

Still, Mexico’s peso was the strongest-performing among the top 10 most-traded currencies after Trump’s inaugural address in Washington made no mention of the country. It was up more than 1.6 percent at 21.582 per dollar in the early afternoon.