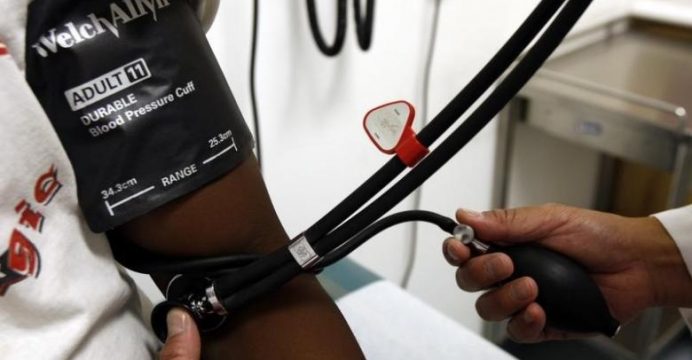 Treatment of high blood pressure is improving in the United States

Treatment of high blood pressure is improving in the United States, but a new study suggests white people are seeing more improvements than black or Hispanic people.

“It probably means we need to tweak those efforts,” he told Reuters Health.

A woman has her blood pressure tested at the Care Harbor four-day free clinic in Los Angeles, California, United States

High blood pressure – known as hypertension – can lead to stroke, heart problems, kidney disease and other health issues, according to the AHA. Doctors usually start prescribing medicine to lower blood pressure when a person’s readings are consistently over 140/90 mmHG.

For the new study, the researchers analyzed data collected from 8,796 U.S. adults with high blood pressure between 2003 and 2012 as part of the National Health and Nutrition Examination Survey.

Blood pressure treatment and control increased during that time period, the researchers write in Circulation: Cardiovascular Quality and Outcomes.

White people tended to do better on a variety of measures, however. About 74 percent of whites, 71 percent of blacks and 61 percent of Hispanics were being treated for their high blood pressure over the course of the study, the researchers found.

All three groups experienced substantial improvement in hypertension control over the course of the study. But while roughly 43 percent of whites had their hypertension under control during the study period, only about 37 percent of blacks and about 31 percent of Hispanics could say the same.

Doctors are treating blacks nearly as often as whites for high blood pressure, the researchers note, but blacks are still less likely to have the condition under control.

Unlike blacks, Hispanics were not treated as aggressively as whites for high blood pressure. They were also less likely to have their condition under control.

“There is no biological evidence to suggest that Hispanics are more vulnerable to loss of blood pressure control,” lead author Dr. Anna Gu, of St. John’s University in New York, told Reuters Health.

For Hispanics, factors like access to health insurance and language barriers may be obstacles to getting appropriate care, Gu said.

“One of the things we should get out of this study is what a bad job we’re doing controlling blood pressure across the board,” said Dr. Leslie Cho, who directs the Cleveland Clinic’s Women’s Cardiovascular Center in Ohio.

Doctors can be better at providing the best proven treatments for individual patients, said Cho, who was not involved with the new study.

For example, she told Reuters Health, high blood pressure among black people responds well to drugs known as calcium channel blockers and diuretics. People should be encouraged to monitor their blood pressure at home, she added.

Argulian said treating hypertension is a complex issue that goes beyond merely giving patients pills to take. Blood pressure control needs to take into account many lifestyle factors like weight and diet, but also social factors like insurance access and ability to get and take medications, he said.