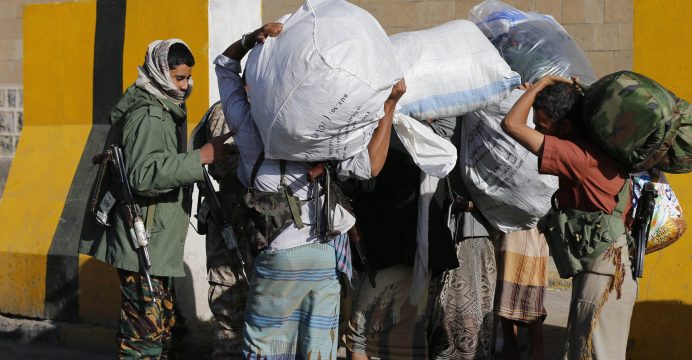 In the midst of one of the world’s worst hunger crises, Yemen’s farmers urgently need support so they can grow more food and provide young people with jobs, the U.N. Food and Agriculture Organization (FAO) said.

Nearly two years of war between a Saudi-led Arab coalition and the Iran-allied Houthi movement has left more than half of Yemen’s 28 million people facing hunger, its economy in ruins and food supplies disrupted, reports Reuters.

Nearly half of Yemen’s 22 governorates are officially rated as being in an emergency food situation, which is four on a five-point scale, where five is famine, the United Nations said last month.”People’s access to food is rapidly worsening and urgent action is needed,” said Salah Hajj Hassan, FAO representative in Yemen.

About two-thirds of the population depends on agriculture for their survival, and it is one of the only sectors of the economy still functioning after years of war, according to FAO.

But farming has been devastated by the conflict, and rural communities need help to restore crops and livestock, the U.N. agency said.

This is especially true for those living in remote or conflict-hit areas which are frequently cut off from food aid, FAO said.

Pressure on rural communities has increased as people fled fighting in the cities to stay with friends or relatives in the countryside, Hajj Hassan said.

Supporting farmers will not only ease hunger levels, it may also help prevent the conflict from worsening.

“From a security point of view, if we don’t give those people the chance to work, what alternatives will young people have?” Hajj Hassan told the Thomson Reuters Foundation by phone.

Yemen’s early warning system also needs to be bolstered so that authorities and aid agencies can monitor changes in hunger levels, and get early information about drought, locust infestations, cyclones and floods – which are frequent visitors to the impoverished country.

“It is absolutely critical for the authorities and the people themselves to … be able to monitor these shocks so … they can take early action to prevent it from turning into a big disaster,” Dominique Burgeon, director of FAO’s emergency and rehabilitation division, said earlier this month.

“In terms of numbers, Yemen is the worst humanitarian crisis in the world,” he said.

The European Union has given 12 million euros to help 150,000 farmers, and to collect more data on people’s access to food, FAO said this week.