Angelique Kerber’s build-up for next week’s Australian Open suffered a setback when the world number one was beaten 7-6(5) 6-2 by Russian teenager Daria Kasatkina in the second round of the Sydney International on Tuesday.

An error-prone Kerber struggled to reproduce the form that led her to a first grand slam triumph at Melbourne Park last year and came unstuck against the 19-year-old Kasatkina.

“The first matches of the year are always tough and I still don’t feel my rhythm. I made too many mistakes,” Kerber, who also lost in the quarter-finals in Brisbane last week, said of her 41 unforced errors.

“So it was not so easy, but I will try to forget the match as soon as I can. It’s the second tournament of the year. We still have a (long way) to go, so I will not (make) a big (deal) of that match.”

Kasatkina kept her nerve when it mattered most and fought off three break points in the sixth game of the second set while leading 3-2 with a break.

From there she did not have to look back. 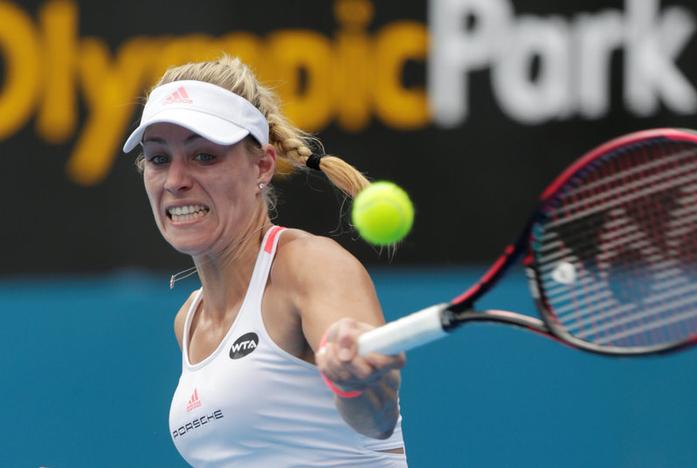 “It’s difficult to explain really. I beat the number one in the world and it doesn’t happen every day,” Kasatkina, ranked 26 in the world, said in a courtside interview.

“I think I will get some confidence,” she said referring to the year’s first grand slam which starts on Monday in Melbourne.

Pavlyuchenkova came into the match having lost five of the last six meetings against Kuznetsova and twice fell back in the opening set.

The 31-year-old double grand slam winner was serving for the set at 5-4 before Pavlyuchenkova reeled off the last three games to bag the set.

“I’m really happy, especially because she’s not only defending champion but my fellow (countrywoman) and she’s top 10 and she’s had a really incredible year last year,” Pavlyuchenkova said.

Next up for the Russian will be former Wimbledon finalist Bouchard who completed her fourth consecutive hard-court win against world number six Cibulkova with a 6-4 6-3 victory.

It will be the first WTA quarter-final appearance for the Canadian in 10 months since Kuala Lumpur, where she lost in the final of the Malaysian Open.