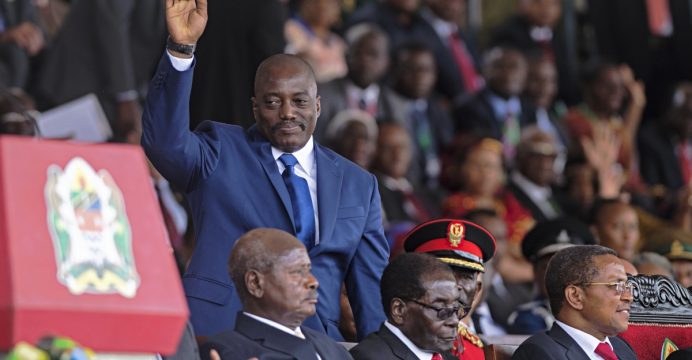 Congo rivals race against clock to reach deal on Kabila

Talks on a deal that would see Congo President Joseph Kabila step down next year continue to falter over the naming of an interim prime minister, one negotiator said, but he held out hope that agreement could be reached on Friday.

Negotiators hope to seal Democratic Republic of Congo’s first peaceful transfer of power since independence in 1960 but there is disagreement as a main opposition bloc demands that a prime minister be named from its ranks.

“We believe that we can find an accord today,” said Archbishop Fridolin Ambongo, one of the Roman Catholic bishops mediating the talks. “If we are here it is because we believe that.”

Despite running past 3 p.m. when a signing ceremony in the capital Kinshasa had been planned, Ambongo said negotiators had reached compromises on several outstanding points.

In an earlier tweet opposition leader Félix Tshisekedi had warned that the negotiations could fall apart.

If they do, the church plans to call off the talks and move ahead with a “Plan B” which the bishops have yet to make public.

Appointment of a prime minister is the one remaining sticking point, said Martin Fayulu, an opposition delegate. A spokesman for the ruling coalition declined to comment.

Kabila’s two-term mandate ended on Dec. 19 but authorities have effectively extended it until 2018.

Under the proposed deal, Kabila would agree not to attempt to change the constitution to participate in elections to be held next year.

Kabila’s actions have sparked demonstrations, with security forces killing around 40 people last week protesting over the tenure of a leader who came to power in 2001 when his father Laurent was assassinated.

A deal to resolve the situation is seen potentially boosting pro-democracy activists in other African countries and buck a trend in which presidents have changed constitutions to stand for third terms.