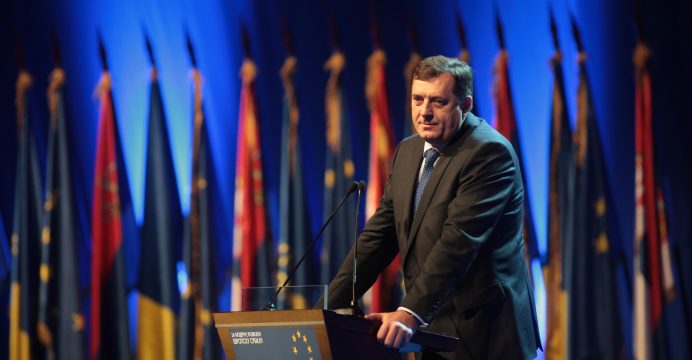 Under U.S. pressure, the leader of Bosnia’s autonomous Serb Republic on Friday submitted to questioning by prosecutors, after defying a summons for three months, for holding a referendum in violation of a Constitutional Court ruling.

The country’s chief prosecutor called in Milorad Dodik in September but he refused to come to the Bosnian capital, citing security concerns. Dodik had said that he would settle for questioning only on the territory of the Serb Republic, reports Reuters.

But on Friday, he was questioned in Sarajevo as a suspect in the case, the prosecutor’s office said in a short statement.Bosnia’s Serb Republic held a referendum in September on a national holiday despite a ruling by the Constitutional Court that it discriminated against the region’s non-Serbs. The court banned the plebiscite.

Bosnia’s Serb Republic held a referendum in September on a national holiday despite a ruling by the Constitutional Court that it discriminated against the region’s non-Serbs. The court banned the plebiscite.

Dodik told the Bosnian Serb news agency Srna he decided to answer the summons after rejecting two previous calls, but criticised the investigation as politically fabricated. He said the prosecutors were under influence of the international community and Muslim Bosniaks, from the country’s other region.

Dodik’s change of tack comes after he spoke to top U.S. officials, who Dodik said asked him to answer the summons and to distance himself from a referendum on secession of the Serb Republic that his party announced for 2018.

The U.S. embassy said Deputy Assistant Secretary of State Hoyt Yee and Ambassador Maureen Cormack spoke to Dodik to underscore their concerns about his statements and actions.

“… defying a decision of the Constitutional Court violates the rule of law, and those responsible must be held accountable. We take any attempt to undermine the Dayton peace agreement very seriously,” the statement said, referring to the U.S.-brokered peace deal that ended the Bosnian 1992-95 war.

The statement urged Dodik to show commitment to the peace accords, adding that the U.S. supported the country’s judicial institutions and their acts, “while we continue to evaluate appropriate consequences authorized under U.S. law”.

Earlier this week, Dodik said he received an invitation to attend an inauguration party of new U.S. President Donald Trump but that the U.S. embassy in Sarajevo refused to issue him a diplomatic visa. He then applied for a regular visa.