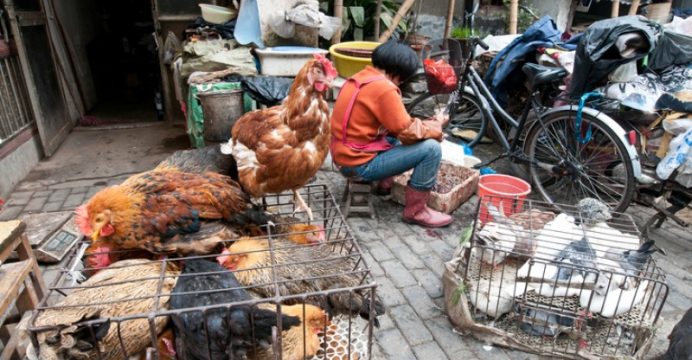 Two people in China died from bird flu, the first fatalities in China among this winter’s cases

Two people in China’s Anhui province have died from H7N9 bird flu, the first fatalities in China among this winter’s cases, while Macau reported its first human infection of the strain since the former Portuguese colony returned to China in 1999.

Anhui has reported five cases of H7N9 avian flu since Dec. 8, including the two people who died, the eastern province’s health authority said in a statement dated Dec. 21, posted on its website. It did not say whether the other three people had recovered or not, reports Reuters.

The Anhui cases bring the total number of people infected with the H7N9 virus in mainland China this month to at least seven. The health ministry said it was taking the reports of the cases seriously.

“Currently experts’ judgment is that it is a small number of individuals, but if we discover that it’s on a large scale, it would be a different (response),” Mao Qunan, a spokesman for the ministry, told reporters in Beijing.

He did not comment on specific measures in response to the outbreak. H7N9 had not been detected in either humans or animals in China until March 2013.

The strain does not seem to transmit easily from person to person, and sustained human-to-human infection has not been reported, according to the World Health Organization.

The danger with any such virus is that it mutates and acquires genetic changes that might increase its pandemic potential.

The last major bird flu outbreak in mainland China – from late 2013 to early 2014 – killed 36 people and led to more than $6 billion in losses for the agricultural sector.

In Anhui, which has a population of almost 60 million, authorities shut some livestock markets and stepped up sterilization to prevent the virus spreading, a spokesman for the provincial health authority’s emergency department said, adding “a few” chickens had been culled.

Authorities in Shanghai, China’s biggest city with more than 24 million residents, said on Wednesday a man diagnosed with the H7N9 strain was being treated there, after traveling from the neighboring province of Jiangsu. The government in Jiangsu was looking into the origin of the infection, the provincial health authority said.

In Xiamen, a city in Fujian province also in the east, authorities ordered a halt to poultry sales from Thursday in the Siming district, after a 44-year-old man was diagnosed with the H7N9 flu, state news agency Xinhua reported on Wednesday.

The patient was in a hospital and was stable, Xinhua said then. The city has a population of about 3.5 million. Hong Kong this week reported its first human bird flu infection for this season.

In Macau, health authorities will soon discharge a patient who contracted H7N9, following a quarantine period of about 10 days, said an official at the Macau Heath Bureau Services who only gave his surname Yang.

The patient, a man, had been in close contact with infected poultry, Yang told Reuters. He will be discharged on either Friday or Saturday. Bird flu is most likely to strike in winter and spring.

Farmers have in recent years increased cleaning, animal detention techniques and built roofs to cover hen pens to prevent infection from wild birds, among other steps, in an effort to stop the disease.

In the past two months, more than 110,000 birds have been killed following bird flu outbreaks, according to the Ministry of Agriculture. They did not lead to human infection.

The latest cases come as South Korea and Japan have ordered the killing of tens of millions of birds in the past month, fuelling fears of a regional spread.