President-elect Donald Trump will remain an executive producer on the reality TV show “Celebrity Apprentice,” new host Arnold Schwarzenegger said on Friday, defending the situation as similar to his own transitions between politics and entertainment.

Trump, who famously barked the catchphrase “You’re fired!” as he dismissed competitors on the “Apprentice” and “Celebrity Apprentice” programs, stepped down from the show last year when he entered the Republican presidential race.

“Celebrity Apprentice” returns to the air with Schwarzenegger, star of the “Terminator” films and former two-term California governor, as host on Jan. 2, 18 days before Trump is sworn in as president.

“I knew from the beginning he is executive producer of the show…His credit was on there,” Schwarzenegger told reporters at a promotional event for the next season. 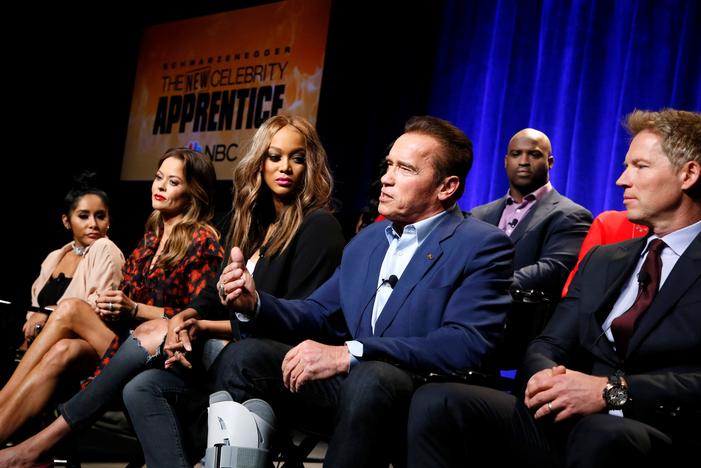 “It is no different than when I was running for governor and I became governor. My credit for starring in ‘Terminator’ still said Schwarzenegger and everything stayed the same and I continued getting my royalties,” he said.

Asked whether Trump should step away from the program, Schwarzenegger joked: “I don’t think he’ll be co-hosting with me.” He suggested Trump could appear on future seasons as a guest adviser “if he has time.”

Variety, which first reported Trump’s decision to remain as executive producer, said his name would air in the credits before that of Schwarzenegger. The show is broadcast by NBC, a unit of Comcast Corp.

Variety said he was likely to be due a payment in the low five-figures per episode. Trump adviser Kellyanne Conway did not confirm that Trump would retain the executive producer credit and said she did not know whether he would accept potential payments for the program.

“Presidents have a right to do things in their spare time or their leisure time,” she told CNN. “Nobody objects to that.”

Debuting in 2004, “The Apprentice” and its spinoff, “Celebrity Apprentice,” were ratings hits and boosted Trump’s popularity after he suffered a financial downturn in the 1990s. “He did a great job. That’s why I was attracted to the show. Now I am the new boss. I am the new host. I hope I can match up with what he has done … I want to have my ratings a little higher than his were,” Schwarzenegger said.

Trump has been speaking to lawyers and protocol experts about his global business interests once he takes office on Jan. 20, Conway said on CNN.