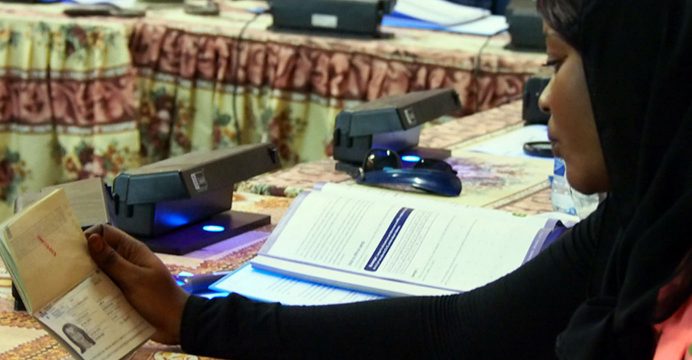 IOM Niger’s border management team earlier this week (5/12) launched the Community Engagement on Border Management Mechanism in Niger project in the capital, Niamey. The USD 990,000 project, funded by the United States, will run from October 2016 to October 2017.

Diffa and Zinder, situated near Niger’s southern border with Chad and Nigeria, are predominantly rural areas, extremely vulnerable to food insecurity due to climate change. Moreover, since 2014, violent and recurrent incidents involving the armed group Boko Haram have left few economic opportunities for young people in the region.

Border management is therefore a key component in assuring both mobility and protection for cross-border communities in the region.

The project will also focus on involving cross-border communities in border management in order to contribute to a better collaboration between communities and law enforcement, and on the enhanced cooperation and coordination of the crisis response in the Diffa region.

Through the strengthening of border security in the Lake Chad Basin region, the engagement of communities in border management, as well as the stimulation of cross-border cooperation, IOM seeks to contribute to the Niger’s strategic and policy objectives.

IOM and the government of Niger see these communities as key actors in border management, and believe that an efficient coordination between all parties is essential for overall security, stability and peace in Niger.

“Security at the borders is key in Niger. This project aims to prevent massive and disorderly displacement especially in border areas, by reinforcing the preparedness of key actors and their coordination,” said Giuseppe Loprete, Chief of Mission of IOM Niger.