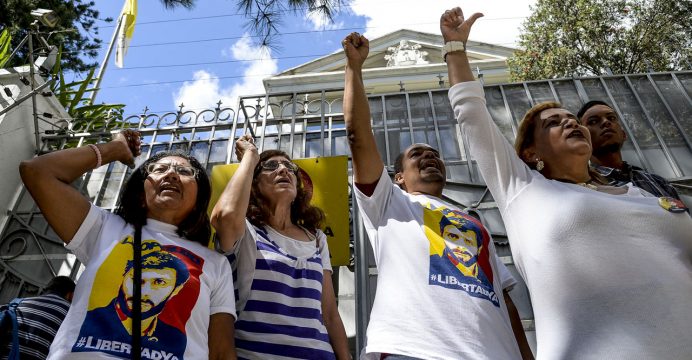 Venezuela’s opposition announced to resume protests against the government﻿

Venezuela’s opposition announced on Wednesday that it will resume protests against the government after withdrawing from the latest round of crisis negotiations, reports BSS.

“What is our role? To accompany the people in their protest and provide a democratic channel for their outrage,” he said.

The announcement follows the center right-dominated opposition’s decision on Tuesday to withdraw from a meeting with the Vatican and regional Latin American mediators.

The now-stalled talks were aiming to calm tensions as the opposition demands a vote on removing President Nicolas Maduro.

The opposition also insists the socialist government release jailed opposition leaders. Maduro has refused both demands, despite insisting he is open to dialogue.

Envoys brokering the negotiation proposed that the parties “cease political fire” before resuming plenary meetings between government delegates and the opposition on January 13. Torrealba said the opposition does not agree to that date.

“We believe that the date will actually be determined by compliance with agreements,” he said.

A recession driven by plunging prices for Venezuela’s crucial crude oil exports has led to shortages of food and medicine.

Citizens face long queues to buy basic supplies and inflation has soared. Deadly riots and looting have broken out over recent months.

Analysts have warned there is a risk of unrest in Venezuela. Anti-government protests in 2014 led to clashes that left 43 people dead.