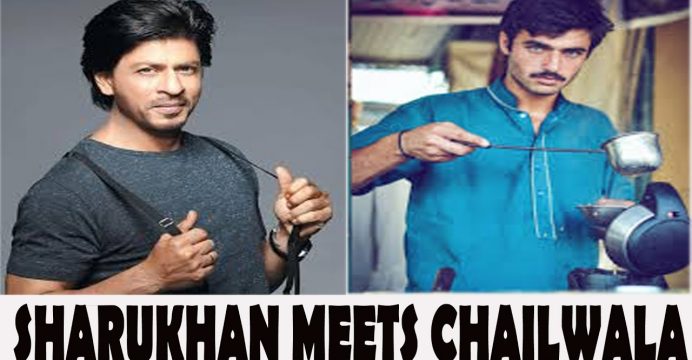 Remember the Pakistan’s dreamy-eyed “chaiwala” who became an Internet sensation? A single Instagram picture of his went viral across the globe and even won the 18-year-old a modelling contract! Upon achieving such a celebrity status, Arshad Khan has become a media darling!

In a recent interview, the “chaiwala,” Arshad Khan, was asked which celebrity did he think he looked like?
He confidently responded, Shah Rukh Khan!Shah Rukh Khan retweeted the

Shah Rukh Khan retweeted the chaiwala’s answer. “How sweet is this. Beauty lies in simplicity,” he tweeted.
Arshad Khan is one of social media’s rags-to-riches story. After his photo went viral, Shah Rukh Khan’s stardom landed him a modelling offer with an Islamabad-based retail site.

Arshad Khan, who comes from a poor background and lives with his sixteen siblings and parents, was later invited to a popular talk show, Good Morning Pakistan, on a local TV channel , where he was given a makeover on-screen.
Light skin and eyes are the attribute of many Pashtuns, tribal inhabitants of northwest Pakistan and southern Afghanistan, romanticized as warriors by the British.

Indian newspapers were the first to seize on the “chaiwala story”, bringing frivolity to recent tensions between the rival neighbors with tweets calling Arshad Khan a “nuclear bomb.”