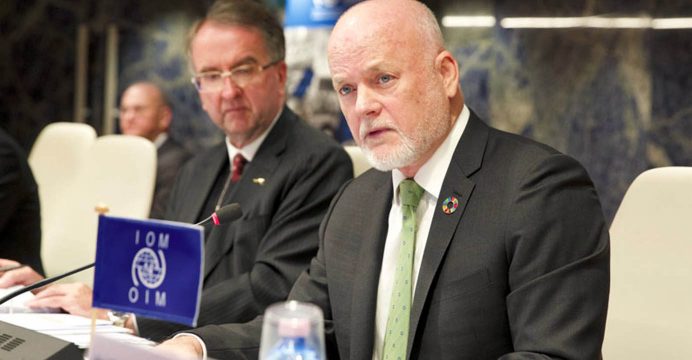 IOM’s 107th Council – the first since the agency entered the United Nations starts Monday, 5 December, at the Palais des Nations in Geneva, Switzerland. It will run through 8 December.

The Council will mark the 65th anniversary of IOM’s founding on 5 December 1951. It will feature keynote addresses by President of Malta Marie-Louise Coleiro Preca and President of the United Nations General Assembly Peter Thomson.

The session will consider an application for IOM membership from the Kingdom of Tonga. Eighteen applications for the observer status will also be considered. Major topics of discussion will include IOM–UN relations and the 2018 Global Compact on Migration.

The Council will also host a presentation of a McKinsey Global Institute report: People on the move: Migration’s impact on individuals and economies and a “Migrants Voices” session, featuring among others, Luis Salinas, producer of the film “The Golden Dream” (Mexico 2013).

The film will be screened as part of IOM’s Global Migration Film Festival at 18.30 on 6 December in the Auditorium Ivan Pictet, Maison de la Paix, Chemin Eugène-Rigot 2, Genève.

The Global Migration Film Festival will take place 5 to 18 December with over 75 screenings all over the world.