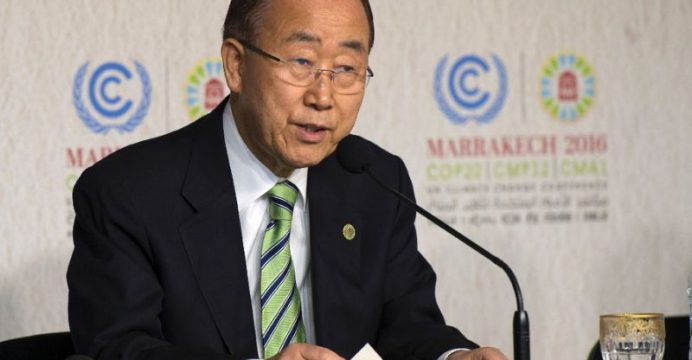 A week after the election to the White House of Trump, who has called global warming a “hoax” and has threatened to “cancel” the global pact, Ban said: “I am sure he will make a good, wise decision”, reports BSS.

He has spoken to the president-elect, the UN secretary-general said, and he was “optimistic” that the business mogul “will hear and understand the seriousness and urgency of addressing climate change.”

Ban was addressing journalists in Marrakesh before opening the “high-level segment” of an annual UN climate meeting — the first since last year’s adoption of the Paris Agreement to stave off calamitous global warming.

Trump’s election has been uppermost on the minds of many delegates and negotiators gathered since last Monday to thrash out a roadmap for putting the agreement into action.

“I have explained at length about our expectations and our hope that… president-elect Mr Trump will hear and understand the seriousness and urgency of addressing climate change,” said Ban.

“As the president of the US I am sure he will understand this, he will listen, he will vary his campaign remarks,” he added.

It was usual for campaigning politicians to engage in rhetoric, but a president had to understand “the reality of the whole world’s problems,” said the UN chief.

“No country, however, resourceful or powerful, is immune from the impacts of climate change,” he added.

“My sense is that as a very successful business person in the past… I believe that he understands that there are market forces already at work on this issue.”

Many fear that withdrawal by the United States, a champion of the deal under President Barack Obama, would shatter the political goodwill built up over years of negotiations, and put the very planet-saving goals of the deal at risk.

While waiting for Trump to make his position clear, many now look to the rest of the world to strongly restate their commitment to the pact — with or without the US.

All eyes will be on Marrakesh Tuesday, where about 60 heads of state and government are scheduled to address the 22nd Conference of Parties (COP22 for short) of the UN’s climate convention, which gathers 196 nations and the EU bloc.

To date, 109 of the 197 parties have officially ratified the Paris Agreement, which entered into force on November 4 after crossing the threshold of 55 ratifications by countries representing 55 percent of greenhouse gas emissions.

They included the United States, which represents about 14 percent of global emissions, and China which accounts for 25 percent.

“International cooperation is a must for us to address climate change,” he said in Marrakesh.

“We have only one planet,” Ban stressed. “We don’t have a Plan B, because there is no Planet B.”

Among the speakers on Tuesday’s agenda are Sudan’s Omar al-Bashir, for whom the International Criminal Court has issued an arrest warrant for war crimes, crimes against humanity and genocide in Darfur.

“If even al-Bashir can contribute to the global climate effort, then president-elect Donald Trump will have no excuse,” commented climate activist Mohamed Adow of ChristianAid.