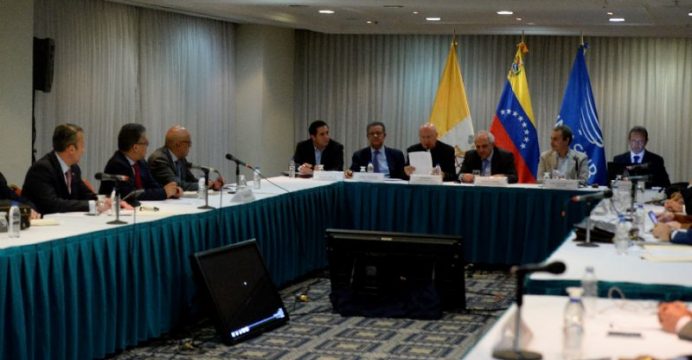 Venezuela’s embattled government and the opposition committed themselves on Saturday to seeking a peaceful, democratic way out of a deepening crisis that has led to food shortages and sky-high inflation.

“We solemnly agree that our political differences can only be settled strictly within the framework of the constitution, and along a democratic, peaceful and electoral path,” representatives of both sides in a Vatican-backed dialogue said in a statement.

Opposition MUD coalition leader Jesus Torrealba has warned his side would seek early elections if President Nicolas Maduro keeps refusing a referendum, as he has vowed, reports BSS.

Under constitutional rules, the opposition must secure a referendum before January 10 if it wants to remove Maduro. Otherwise, he or his allies will keep power until 2019. The agreement unveiled Saturday does not mention early elections.

But MUD negotiator Carlos Ocariz read out a statement later that said the opposition would press on “until it gets the most important thing: national elections and a recall referendum.”

Vatican envoy Claudio Maria Celli said the sides had agreed to “a roadmap” that aims to normalize constitutional relationships between the branches of government and deal with the crisis.

He said the delegates agreed on the need to give priority to increasing the supply of food and medicine through stepped up production and imports.

In the political realm, they agreed to resolve an impasse over the Supreme Court’s having declared the National Assembly in contempt for having sworn in three deputies. The court had blocked the three from taking their seats after the government claimed they won by fraud.

Ocariz said new legislative elections would be held in the state where the deputies were from. But neither the joint statement nor the government made mention of that.

The parties also agreed to “work together” on adding two seats to the National Electoral Council, Celli said. The opposition has long protested that the council, whose mandate expires next month, is stacked with Maduro loyalists.

Although there was no mention of it in the documents released, Ocariz said the sides also had agreed to the release of political prisoners and jailed activists but gave no specifics.

The parties agreed to meet again on December 6 and to broaden the talks to include representatives of unions, the private sector, and two state governors.

A major aim of Saturday’s joint statement, which was entitled “Coexistence in Peace,” appeared to be to set a better tone in the often bitter relations between the government and the opposition.

The sides promised to “establish a respectful political relationship.” In an interview with an Argentine radio station, President Nicolas Maduro expressed satisfaction that the opposition had finally entered a dialogue.

“I recognize the Venezuelan opposition and am betting on the success of the process of dialogue and reengagement,” he said.

But the opposition is divided over the talks, disappointed that its leaders in the National Assembly and the MUD dropped a more confrontational approach.

“We consider it a most serious error to have demobilized and demoralized the citizenry in the name of a dialogue that does not propose as its central issue the replacement of the Maduro regime,” said former opposition deputy Maria Corina Machado.

Venezuela is rich in oil but short of food. The military controls a national food distribution system that is hobbled by theft and black marketeering.

An economic crisis worsened by falling crude prices has led to shortages of basic supplies and soaring inflation, which the International Monetary Fund estimates will hit 475 percent this year.

The opposition blames Maduro’s economic policies and mismanagement for the crisis. He contends the crisis is the product of a US-backed capitalist conspiracy. Analysts say there is a risk of violent unrest. Clashes at anti-government riots in 2014 left 43 people dead.

Mass street protests erupted after authorities last month blocked the opposition’s drive to have a referendum held on removing Maduro from office.

The president has the public backing of the military high command and control of most state institutions. Donald Trump’s victory in the US presidential election adds another dimension to an already tense and uncertain situation.

Venezuela’s foreign ministry said Maduro had told US Secretary of State John Kerry on the phone that he hoped for “positive work” with Trump.

But the Venezuelan president has had testy relations even with the more moderate President Barack Obama, often accusing Washington of plotting his overthrow.