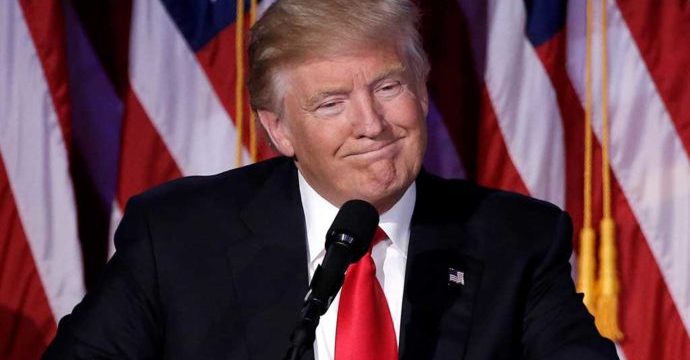 President-elect Donald Trump huddled with advisers inside his Manhattan residence Saturday, plotting his next moves as thousands of demonstrators besieged Trump Tower and marched through other US cities in fourth day of protests. Trump appeared to be making some headway in forming a new administration.

Campaign manager Kellyanne Conway told reporters his appointment of a White House chief of staff was “imminent” and that Republican National Committee chairman Reince Priebus was among the candidates for the key post.

Trump has sought to strike a conciliatory tone since his election sent a shockwave around the world, announcing Friday he no longer intended to completely scrap Barack Obama’s signature healthcare law, Obamacare, reports BSS.

Protesters take to the streets following an anti-Trump demonstration in front of Trump Tower in Manhattan, New York

“This will prove to be a great time in the lives of ALL Americans. We will unite and we will win, win, win!” he tweeted Saturday.

Hillary Clinton, meanwhile, blamed FBI director James Comey for her defeat, telling campaign donors his reopening in late October of a probe into her email “stopped our momentum,” US media reported.

Meanwhile, a swelling crowd of more than 5,000 people marched toward Trump Tower in Manhattan amid cries of “Trump is NOT my president.”

In Los Angeles, as many as 10,000 people turned out for a march in the city’s downtown after a night of protests that ended in several hundred arrests. Thousands more marched peacefully in Chicago.

Trump Tower has been the epicenter of furious activity as the Trump team fleshes out his cabinet picks and works to fill hundreds of other top government jobs.

“He’s receiving many visitors,” Conway said. “These are exciting times.”

Among those seen entering the tower Saturday were Nigel Farage, whose UK Independence Party backed the Brexit vote that stunned Britons just as Trump’s victory did many Americans. Conway said his meeting with Trump was “very productive.”

“They absolutely had an opportunity to talk about freedom and winning and what this all means for the world,” she said.

Also entering the building was the provocative documentary filmmaker Michael Moore — whose impromptu effort to meet with Trump was blocked by Secret Service agents. Marion Marechal-Le Pen, a rising star in France’s far-right National Front and niece to its leader, Marine Le Pen, said Saturday she had contacted the Trump team about working with them.

Although Trump’s election has set off alarm bells in many world capitals, it has been warmly welcomed by Europe’s surging far-right movements.

Around the world, Trump’s every move is being scrutinized for clues to how the political novice will govern. His U-turn on Obamacare — which candidate Trump had branded a “disaster” — was prompted by his White House meeting with the outgoing president a day earlier.

Trump told The Wall Street Journal he may maintain some of the program’s more popular elements, such as a ban on insurance companies denying coverage because of so-called pre-existing health conditions. This marked one of several moves by Trump and his advisers away from his more sweeping campaign positions.

Asked by The Journal whether he would, as threatened, name a special prosecutor to investigate Clinton over her use of a private email server as secretary of state, Trump deflected, saying his priorities were “health care, jobs, border control, tax reform.”

Not long ago, Trump was leading crowds in chants of “Lock her up!” Trump surrogate Newt Gingrich also cast doubt on whether Trump would make Mexico fund his proposed border wall — another rallying cry.

“He’ll spend a lot of time controlling the border. He may not spend very much time trying to get Mexico to pay for it, but it was a great campaign device,” Gingrich was reported as saying by The Washington Post.

A COUNTRY THAT LOVES

Despite his more measured tone, the Republican has yet to respond to mounting calls to reassure Americans who fear a xenophobic crackdown under his authority.

The Southern Poverty Law Center (SPLC), which monitors hate groups, tracked more than 200 incidents of election-related harassment in the three days following the election. More than 47,000 people have signed an SPLC petition urging Trump to clearly distance himself from hate groups.

Growing numbers of Americans, including many in Saturday’s protests, are wearing safety pins to symbolize solidarity with those his words have targeted, like Muslims, Latinos, and women. The practice began in Britain following the Brexit vote with its strong anti-immigrant undertones.

Asked whether he thought his rhetoric had gone too far, Trump told The Wall Street Journal: “No. I won.”

But he added that he would now take a more positive approach. “I want a country that loves each other,” he said.

In a CBS interview to be aired on Sunday, Trump credited his use of social media — he claims 28 million followers on Twitter and other platforms — for helping him win the election.

He also spoke warmly of the election night call he received from Clinton conceding his victory, praising her as “very strong and very smart.”