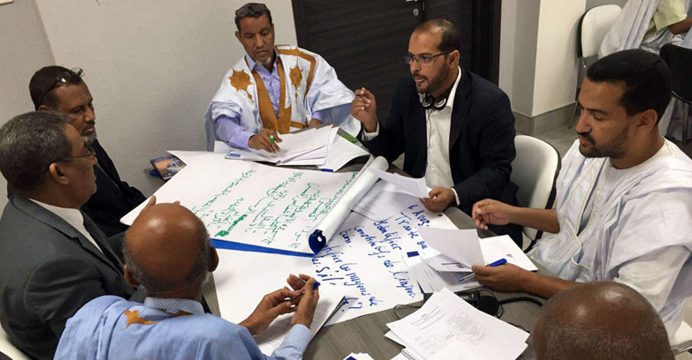 Mauritania judicial officials got training on trafficking in persons

A group of 31 magistrates and court clerks were this week trained on combating human trafficking in Nouakchott, Mauritania.

Financed by the Government of Germany, the training was organized by IOM Mauritania, in partnership with the Mauritanian Ministry of Justice, the UN Office on Drugs and Crime and Office of the UN High Commissioner for Human Rights.

“We must fight against the scourge of trafficking in persons, protect victims and incriminate culprits,” said the Secretary General of the Ministry of Justice, Mohamed Lemine Ould Sidi Baba.

He underlined the efforts undertaken by the country to fight trafficking, to ratify all conventions related to human rights, establish institutions and adopt laws which penalize trafficking in persons.

Over the course of the four-day training, participants from all over Mauritania looked at the legal framework, the investigation of cases and the protection of victims.

The training was also an opportunity to discuss local specificities and integrate them into national and international perspectives.

The trainings are part of a German-funded IOM project: Understanding and Addressing Trafficking in Persons in Mauritania.