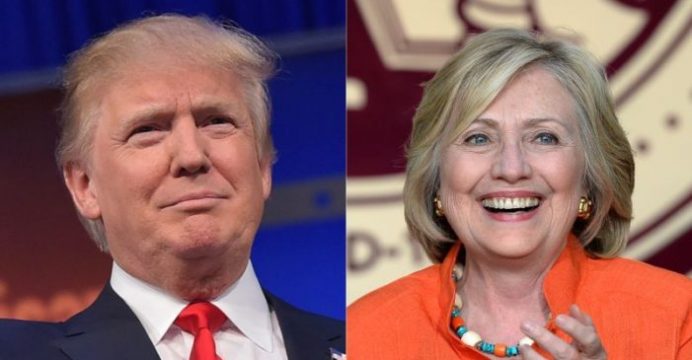 Hillary Clinton and Donald Trump squared off on Thursday in do-or-die North Carolina with dueling rallies in the home stretch of a bitter, hard-fought US presidential race that is tightening by the day.

As the candidates jostle and joust for supremacy in the handful of battleground states that will decide the November 8 election, two of the biggest prizes on the electoral map, Florida and North Carolina, have narrowed into absolute dead heats, according to Real Clear Politics poll aggregates, reports BSS.

North Carolina was suddenly in the eye of the political storm, with the candidates frantically criss-crossing the southeastern state where they are locked at 46.4 percent apiece.

In an increasingly cat-and-mouse game, their two motorcades even passed one another Thursday on the tarmac at the Raleigh-Durham airport ahead of their rival rallies.

“You’ve got to get everyone you know to come out and vote,” Clinton implored supporters in Raleigh, joined by her onetime primary adversary Senator Bernie Sanders and “Happy” singer Pharrell Williams.

“The best way to repudiate the bigotry and the bluster and the bullying and the hateful rhetoric and discrimination is to show up with the biggest turnout in American history.”

Obama shuttled into Florida for fiery rallies aimed at turning out the Democratic base for Clinton in a must-win state for Trump, who is under pressure to snatch battleground states and even poach one or two Democratic strongholds if he is to prevail.

After months of vitriolic and turbulent campaigning, political tribalism appears to be returning to the fore in the deeply divided nation ahead of Election Day.

“This will be a close race and you cannot take it for granted,” Obama warned supporters in Jacksonville, painting an apocalyptic vision of what Trump would mean for American democracy.

Clinton added to the portrayal, telling North Carolinians that “if Donald Trump were to win this election we would have a commander in chief who is completely out of his depth and whose ideas are incredibly dangerous.”

Trump heads Friday to New Hampshire, Ohio and Pennsylvania, while Clinton stumps in Ohio and Michigan.

“I feel all fired up and ready to go for the next five days,” Clinton said.

The Democrats’ last stand will come in Philadelphia on the eve of the election for a joint rally binding America’s two most powerful political dynasties.

She will be joined by husband Bill Clinton, President Obama and 2016’s most potent campaigner, First Lady Michelle Obama.

Pennsylvania is clearly a firewall for Clinton; a Trump win there would be a giant step toward his becoming the 45th president.

But a rally in Philadelphia — the City of Brotherly Love — sends an unmistakable message: Trump is a threat to the republic. It was here that the US Constitution came into being in 1787.

“He certainly knows how to shake things up, doesn’t he?” she said of Trump’s incendiary campaign.

Trump’s third wife insisted her husband, with whom she lives in opulence,was running to improve the lives of suffering workers, struggling parents and children.

She also made a bald play for votes of suburban mothers, who could make all the difference in the tightly contested state where Clinton’s lead has narrowed, by fretting that “children and teenagers can be fragile” and pledging to address bullying if she becomes first lady.

Despite the Manhattan mogul’s boasts about sexual assault and allegations of groping by several women, white women are evenly split between the candidates, the CBS poll showed.

As the race nears its conclusion, profound Republican skepticism about Trump’s controversial candidacy appears to be ebbing.

Similarly, Clinton’s FBI troubles — the bureau is taking new looks into the case of Clinton’s private emails — appear to have dissuaded few Democrats, with only eight percent saying it would make them less likely to vote for the former secretary of state.

But CBS News, citing US officials, reported that the FBI has found Clinton-related emails on the laptop belonging to close aide Huma Abedin and her estranged husband Anthony Weiner, the disgraced ex-congressman under investigation for sending sexual messages to a minor.

Trump has seized on the controversy, airing a new ad that highlights the FBI probe and declares Clinton “unfit to serve” — language Clinton often uses to describe her rival.

With the campaign in its final stages, Trump was sticking to the teleprompter and avoiding his most explosive rhetoric.

“Nice and cool. Right? Stay on point, Donald, stay on point,” the 70-year-old said aloud during a Florida rally.

While Trump has no room for error, Clinton has sought to expand into Republican territory, notably Arizona, where she attended a huge rally Wednesday.

Her running mate Tim Kaine visited the border state Thursday, making a play for Hispanic voters by delivering his remarks entirely in Spanish.