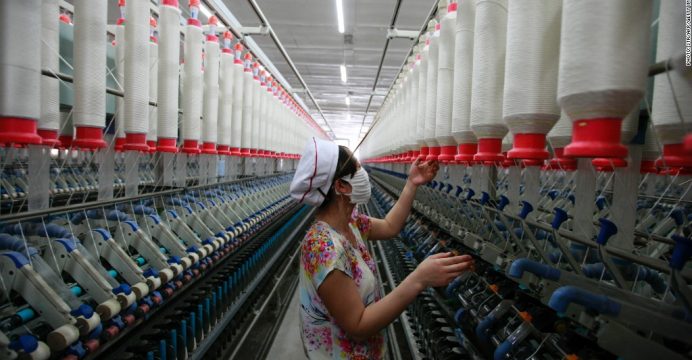 Factory activity in China expanded at its fastest pace in more than two years last month, official and private measures both showed on Tuesday, boding well for the world’s second-largest economy.

Investors closely watch the purchasing managers’ index (PMI) numbers, which gauge conditions at Chinese factories and mines, as the first indicators of the health of the economy each month, reports BSS

The official PMI came in at 51.2 for October, its highest since July 2014, figures from the National Bureau of Statistics (NBS) showed.

That was up from September’s 50.4 and was well ahead of the median forecast of 50.3 in a Bloomberg News survey of economists.

A figure above 50 signals expanding activity, while anything below demonstrates shrinkage. “Production and market demand is picking up again, accelerating expansion,” NBS analyst Zhao Qinghe said in a statement.

But Zhao added that downward pressures remain on imports and exports owing to the sluggish recovery in global growth. The private Caixin Purchasing Managers’ Index, which focuses on small companies, pointed to a similar trend.

Its October reading climbed to 51.2, up from 50.1 the previous month and also the highest since July 2014, the Chinese financial magazine said in a joint statement Thursday with data compiler IHS Markit.

“The economy seems to be stabilising for the moment, owing primarily to policies implemented to sustain growth,” Caixin analyst Zhong Zhengsheng said in the statement.

But Zhong warned: “Supportive policies must be continued, or industrial output may be dragged down by a slowdown in investment.”

The key manufacturing sector has been struggling for months in the face of sagging world demand for Chinese products and excess industrial capacity left over from the country’s infrastructure boom.

“This might be as good as it gets,” HSBC Holdings economic researcher Frederic Neumann told Bloomberg.

“A generous stimulus injected earlier this year is still winding itself through the economy,” he added, and with the government now “tapping the brakes” in the property sector “growth will likely cool again in the coming months”.

China is a vital driver of global growth, but its economy expanded only 6.9 percent in 2015 — its weakest rate in a quarter of a century — and has slowed further this year.

Beijing has said it wants to reorient the economy away from relying on debt-fuelled investment to boost growth and towards a consumer-driven model, but the transition has proven challenging.