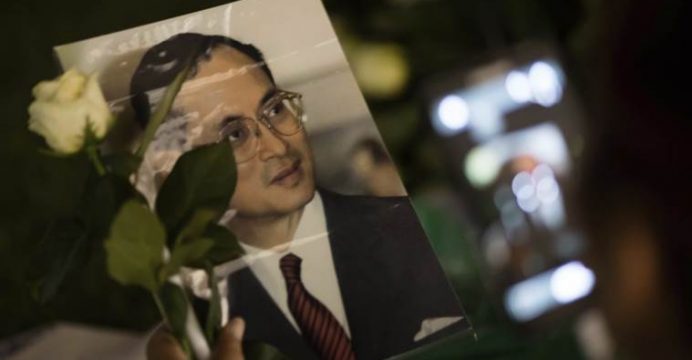 Tens of thousands of Thais streamed into Bangkok’s Grand Palace on Saturday as the public was granted its first chance to enter the throne hall where the body of late King Bhumibol Adulyadej is lying in state.

Bhumibol, who died at 88 two weeks ago, was adored by many of his subjects and seen as an anchor of stability in a kingdom rocked by turbulent politics, reports BSS.

His passing has thrust the country into a year of official mourning, with most Thais wearing only black and white since his death and TV channels devoting hours of airtime to footage from his 70-year reign.

For the past two weeks crowds have massed outside the Grand Palace, a compound of shimmering temples and pavilions in Bangkok’s old quarter, to pay tribute before a portrait of the monarch.

But Saturday was the first time the public has been allowed to enter the decorated throne hall where his body is lying in a coffin behind a gilded urn.

“I have been waiting here since 1:00am,” said Saman Daoruang, an 84-year-old sitting in a thousands-long queue that snaked around a large field outside the palace.

Authorities have said that 10,000 mourners will be permitted to enter the throne hall per day, in small batches. Like many in the crowd, Saman has been sleeping in a tent on the grassy parade grounds since he arrived in Bangkok by train from northern Nakhon Sawan province.

“But I haven’t been able to sleep because I was so thrilled and proud to come here,” he told AFP, clutching several portraits of the monarch.

Thailand’s arch-royalist military government, which came to power in a 2014 coup, has encouraged mass displays of devotion for the late king and helped arrange a flurry of free bus, train and boat rides to move mourners to the capital.

It has also stepped up its enforcement of lese majeste — a draconian law that punishes criticism of the monarchy with up to 15 years in prison per offence.

The law has significantly curbed public discussion about the heir to the throne, Crown Prince Maha Vajiralongkorn, who has yet to attract the same level of devotion as his father.

In a move that surprised many, the 64-year-old asked to delay his proclamation as king in order to grieve with the nation, according to junta chief Prayut Chan-O-Cha, who has presided over the transition. The regime has not provided a clear timeline for when the prince will formally ascend the throne.