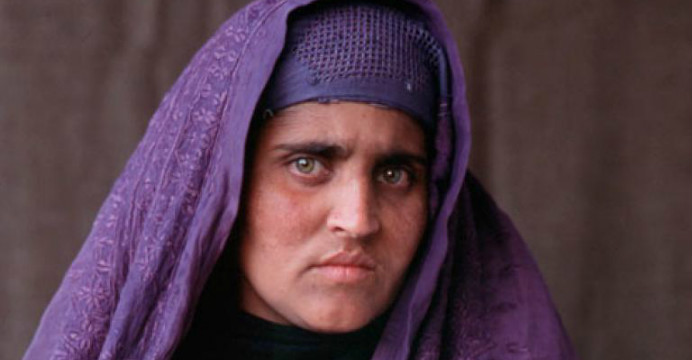 An Afghan woman immortalized on a celebrated National Geographic magazine cover as a green-eyed 12-year-old girl was arrested on Wednesday for living in Pakistan on fraudulent identity papers.

The haunting image of Sharbat Gula, taken in a Pakistan refugee camp by photographer Steve McCurry in the 1980s, became the most famous cover image in the magazine’s history, reports BSS.

Her arrest highlights the desperate measures many Afghans are willing to take to avoid returning to their war-torn homeland as Pakistan cracks down on undocumented foreigners.

In 1984, photographer Steve McCurry shot a portrait titled “Afghan Girl” that would become the defining image of his career and one of the most famous National Geographic covers ever published

Pakistan’s Federal Investigation Agency (FIA) arrested Gul for fraud following a two-year investigation on her and her husband, who has absconded.

Investigators, who have uncovered thousands of fraud cases over the last decade, launched a probe into her application shortly after she procured the card.

Photographer Steve McCurry with his photos of Sharbat Gula, the ‘Afghan Girl’

Ilyas said the authorities were also seeking three National Database Registration Authority (NADRA) officials found responsible for issuing Pakistan’s national identity card to Gula, who have been at large since the fraud was uncovered. He said that Gula faces seven to 14 years in prison and a fine of $3,000-$5,000 if convicted.

In reality, she is unlikely to serve such a harsh sentence — many Afghans who have been convicted in similar cases have been deported before they could be sent to prison.

Officials say Gula applied for a Pakistani identity card in Peshawar in April 2014, using the name Sharbat Bibi. Thousands of Afghan refugees have managed to dodge Pakistan’s computerized system to get an identity card.

The photo attached to her application featured the same piercing green eyes seen in McCurry’s famous image, only older.

The original photograph was taken in 1984 in a refugee camp in northwest Pakistan during the Soviet occupation of Afghanistan.

McCurry later tracked her down, after a 17-year search, to a remote Afghan village in 2002 where she was married to a baker, and the mother of three daughters.

Pakistan has for decades provided safe haven for millions of Afghans who fled their country after the Soviet invasion of 1979.

The country hosts 1.4 million registered Afghan refugees, according to UNHCR, making it the third-largest refugee hosting nation in the world.

The agency also estimates a further one million unregistered refugees are in the country. Since 2009, Islamabad has repeatedly pushed back a deadline for them to return, but fears are growing that the latest cutoff date in March 2017 will be final.

Meanwhile, refugees are increasingly worried about their future in Pakistan as the country cracks down on those who have obtained fake ID cards.

Some 18 NADRA officials were under investigation for issuing ID cards to foreigners and eight were arrested, the official said.

More than 350,000 Afghan refugees have returned home from Pakistan this year, UN data shows, with the torrent of people crossing the border expected to continue.

They face an uncertain future in an Afghanistan still at war and already overwhelmed by so many internally displaced people fleeing fighting that officials warn of a humanitarian crisis.