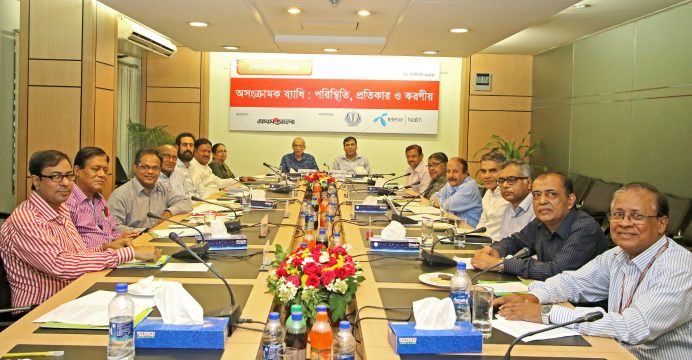 The survey was released on October 18 at a roundtable with the Bangladesh Network for NCD Control and Prevention (BNNCP), a group of eminent healthcare institutions dedicated to combating the spread of non-communicable diseases (NCDs) like cancer, diabetes, and heart disease.

People recognize the need to make changes in their daily lives to achieve better health, according to the survey.  Half of all of survey respondents said that “healthy eating” was a personal health goal.

Of respondents who currently smoke (almost 50% of males in the sample), nearly three quarters said that they wanted to quit.  Poor diet and tobacco use, along with physical inactivity and excessive alcohol consumption, are the major risk factors contributing to the rise of NCDs globally.

However, knowing what and how to change is a major challenge, the survey found.  Despite having the ambition to eat healthier, 84% of those surveyed did not know what the recommended daily calorie consumption was for men and women.

Furthermore, only 3.5% reported eating the recommended two servings of fruit per day, and no one said they ate the recommended five servings of vegetables per day.  Although most respondents were aware of the need to exercise at least five times per week, most did not actually fulfill this goal, citing lack of knowledge and time.

People are aware of NCDs, but the understanding of causes and prevention are uneven, according to the survey.  90% of respondents knew that smoking increases the risk of heart disease, 70% could link high blood pressure with the risk of strokes, and diabetes was recognized as one of the most common health conditions in Bangladesh.

Cost is a key barrier for people accessing healthcare, the survey found.  Half of all respondents felt that they were unable to access quality healthcare when they needed it.  People cited prohibitive cost as the top barrier to accessing care (24%), followed by long waiting times for services (24%), and long distances to travel (21%).

The survey was conducted by the Nielsen Company during March and April 2016.  1,100 adults were interviewed from across all seven divisions in Bangladesh, with an equal representation of women and men, and an urban to rural ratio of 23% to 77%.

“This is a global problem. By understanding the aspirations of Bangladeshis we are confident that we can work to make these changes a reality.”

The BNNCP and Telenor Health are collaborating to explore how widely-available mobile technology can be used to change attitudes and behaviors relating to NCDs.  In June, Telenor Health launched Tonic, a digital health service that provides users with information about how to live healthier lives along with other benefits to make healthcare more accessible and affordable.  Tonic is offered free of charge to all Grameenphone customers, and recently reached the milestone of one million members just four months after launch