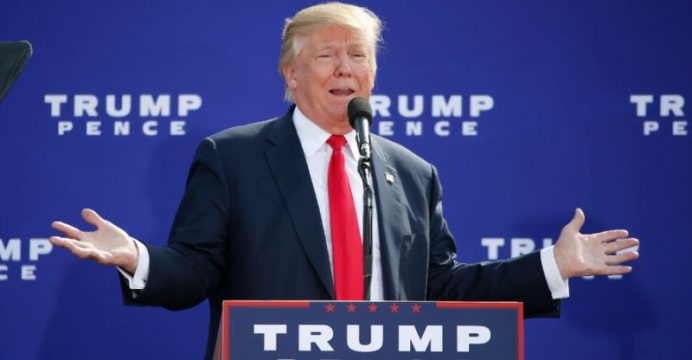 Donald Trump fired off an erratic new broadside at Hillary Clinton on Sunday, making more explosive claims that American media and a conspiracy to commit voter fraud are rigging the presidential election against him.

Amid the latest Twitter blasts from the Republican White House nominee, his running mate Mike Pence sought to lower tensions by insisting his camp would accept defeat if that’s what voters decide on November 8, reports BSS.

Two polls out on Sunday — and carried out in time to gauge voter reaction to the slew of sexual misconduct allegations against Trump that emerged last week — put Clinton ahead.

But they did so by vastly different numbers: an ABC News/Washington Post survey had Clinton four points ahead while an NBC News/Wall Street Journal poll put her margin at 11 points.

Trump, in a long stream of tweets on Sunday, said repeatedly that US media are rigging the election by hammering away at what he calls fabricated accounts of him making unwanted sexual advances on women. Trump has denied those allegations, which burst into the race last week in a steady, damaging stream.

“Polls close, but can you believe I lost large numbers of women voters based on made up events THAT NEVER HAPPENED. Media rigging election!” Trump wrote.

In another tweet, he suggested — without offering evidence — that voter fraud will be a problem on election day.

“The election is absolutely being rigged by the dishonest and distorted media pushing Crooked Hillary – but also at many polling places – SAD,” he said.

“You want me to (say) that I think the election in Philadelphia and Chicago is going to be fair? I would have to be a moron to say that,” he said.

Trump has been insisting for months that the election is rigged — and has repeated the charge like a mantra since Clinton started to pull away in the polls a few weeks ago.

“He is swinging at every phantom of his own imagination because he knows he’s losing,” Clinton’s running mate Tim Kaine told ABC on Sunday.

Trump’s assertions have been criticized as dangerous as it seems to raise the prospect of his supporters lashing out if he loses.

After the first debate, Trump said he would respect the election result. But he backtracked in an interview with the New York Times last month, saying, “We’re going to see what happens.” Pence tried to put the issue to rest Sunday, telling CBS News, “We will absolutely accept the results of the election.”

Pence was asked about a Trump supporter who told a newspaper he planned to go to polling places and make voters “a little bit nervous.” Pence said he did not condone such behavior.

“I don’t think any American should ever attempt to make any other American nervous in the exercise of their, of their franchise to vote,” he said, adding that those concerned about voter fraud should volunteer at their local polling stations.

‘HANDED ME’ THE ELECTION

The nation’s top elected Republican, House Speaker Paul Ryan, who has declared that he would no longer “defend” the party’s nominee, rebuked Trump over his comments questioning the validity of the election process.

“Our democracy relies on confidence in election results, and the speaker is fully confident the states will carry out this election with integrity,” his spokeswoman AshLee Strong said in a statement.

Trump lashed out at Ryan on Sunday evening, saying “The Democrats have a corrupt political machine pushing crooked Hillary Clinton. We have Paul Ryan, always fighting the Republican nominee!”

“Paul Ryan, a man who doesn’t know how to win (including failed run four years ago), must start focusing on the budget, military, vets etc.”

As Trump and Clinton prepare for their third and last debate on Wednesday, Clinton is lying low, with the apparent strategy of letting Trump self-destruct.

But these are also delicate times for Clinton. As sexual misconduct claims against Trump dominate the campaign, is it hard for Clinton to speak out because she stayed beside her husband Bill even as he was mired in the Monica Lewinsky and other sex scandals, humiliating her on his way to being impeached.

But there is no question the race is shifting in her favor. The CBS News Battleground Tracker Poll out Sunday found that, because of a surge in support for Clinton among women, she now leads by six points in a dozen crucial swing states.

Underscoring the campaign’s divisiveness, a Republican Party office in the southern state of North Carolina was firebombed overnight Sunday, with the message “Nazi Republicans leave town or else” sprayed on an adjacent building. No one was hurt in the attack.