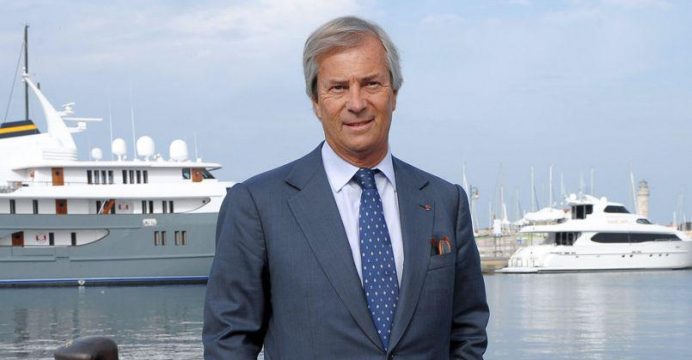 Vincent Bollore raised stake in Vivendi to above 20 percent﻿

Vincent Bollore has raised his stake in Vivendi to above 20 percent, the French tycoon’s holding company said on Monday, further tightening his grip on the media giant as he presses ahead with trying to turn Vivendi into a European media powerhouse.

Vivendi’s share price, which has fallen by about 8 percent since the start of the year compared with a drop of more than 11 percent in the Stoxx Europe 600 media sector index .SXMP was up 2.2 percent at 18.47 euros by 1227 GMT. Shares in Bollore SA were up 1.5 percent at 3.09 euros, reports Reuters.

The Bollore Group, which until now had held a 15 percent stake in Vivendi, said in a statement that as a result of a number of transactions the size of its holding had now moved above 20 percent and would be around 29 percent by April next year after taking into account the build-up of the double voting rights which have been granted to established shareholders by a new French law.

“These operations reflect the confidence the Bollore Group has in Vivendi’s potential for development and its willingness to remain as the primary shareholder of the company in the long term,” Bollore’s holding company said.

The 64-year-old businessman has made no secret of his plan to gradually increase his holding in Vivendi while pursuing his expansion strategy.

Since Bollore became chairman in 2014 Vivendi has bought a key stake in Telecom Italia and moved back into the video games business by acquiring French company Gameloft and buying a 22.8 percent stake in sister company Ubisoft, despite opposition from the founding Guillemot family.

However, Bollore has also encountered a number of obstacles this year, including continued resistance by the Guillemots to allowing Vivendi to take control at Ubisoft. In addition Italian broadcaster Mediaset is now suing Vivendi for damages after it backed away from a deal to buy its pay-TV unit Mediaset Premium.

“We see this more as a move to consolidate the long-term control of the company, perhaps for the benefit of the next generation of Bollores, rather than a conviction that certain share price drivers (recovery at Canal Plus) are about to turn positive,” Kepler Cheuvreux analysts said in a note.

“That said, the investment in Vivendi now represents close to 5 billion euros, more than half the market cap of Bollore Group, so the long-term conviction can be said to be firmer than ever,” they added.

Losses at TV subsidiary Canal Plus’ French channels totaled 264 million euros in 2015 and could reach 400 million euros this year, Vivendi has said.