After years of abandonment, the ruined Darul Aman palace in Kabul, one of the most recognizable symbols of Afghanistan’s decades of war, is to be restored in a project authorities hope will come to symbolize revival instead of destruction.

The aim is an ambitious one, with Afghan forces fighting the Taliban insurgency across the country, Kabul regularly hit by suicide attacks and the broken economy seemingly in no better shape than the bombed-out palace itself.

The project was launched by President Ashraf Ghani in May and Urban Development Minister Sadat Mansoor Naderi said the government hoped the site, next to a new, Indian-financed parliament, can become the center of a new government quarter as well as a tourist attraction. For the moment, such goals remain a long way off and the most visible sign of renewal is a crew working on preparing the site for the full reconstruction to come later.

“In the team we’ve built here, we’ve got over 100 young graduates,” Naderi told Reuters during a visit to the site this week.

“Twenty percent of the technical engineers you see here are female,” he said.

In a country where opportunities for women to develop careers are severely limited, the restoration effort, which will depend heavily on support from foreign donors, is a showcase for young graduates.

“This is a historical site and of course it’s a new experience,” said Sofia Roshan, 24, a structural design engineer who graduated recently from a private university in Kabul and has been working at the site for four months. 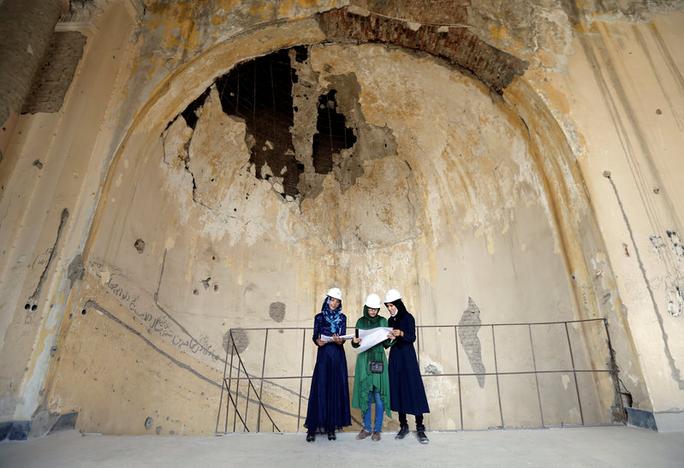 She said the fact the restoration was so unusual meant there was more freedom for younger engineers and women in particular than there would be in a standard construction project.

“It’s different from a new building so it’s a new experience for everyone. We can learn from the project but we can also share our opinions,” she said.

“People don’t put much value on women in Afghanistan but this project will show that women can do anything.”

‘THE RESULT OF WAR’

Reduced to a shattered skeleton following repeated bombardments over the years, the imposing European-style palace was built in the 1920s by former King Amanullah Khan on a low hilltop just outside the capital.

The edifice was destroyed in the civil wars of the 1990s, when fighting between rival militias killed thousands in Kabul. In the years after the fall of the Taliban, the bullet-scarred wreckage was left empty as a flood of foreign cash fueled a boom in the city around it.

Its abandoned corridors, rooftops open to the sky and the faded graffiti left by passing militia fighters have a ghostly feel as dusty sunlight streams in through cracks in the walls.

“This is the result of war. Think about that,” reads a message scrawled on a corner wall.

Naderi said requests for proposals would soon be issued, inviting foreign companies to bid for work on the project, which could cost up to $20 million, and officials had already sought advice abroad.

The celebrated restoration of the Reichstag in the German capital Berlin, which like the Darul Aman palace was destroyed in war and abandoned for decades and which incorporates many reminders of the destruction, was one model he had looked at.

“Obviously, we are looking at other countries with similar experiences to ours,” he said.

How long the project may take is not clear. Until engineers complete surveys, they will not know the full extent of the damage and how much work will be needed to repair it. Financing must also be worked out and Afghanistan’s unpredictable politics may still create obstacles.

But for Sonia Alizada, one of the young engineers working on the palace, her enthusiasm outweighs any doubts.

“We are a team of girls working here with joy and everyone has a huge interest,” she said. “We hope for peace, stability and development in our country.”