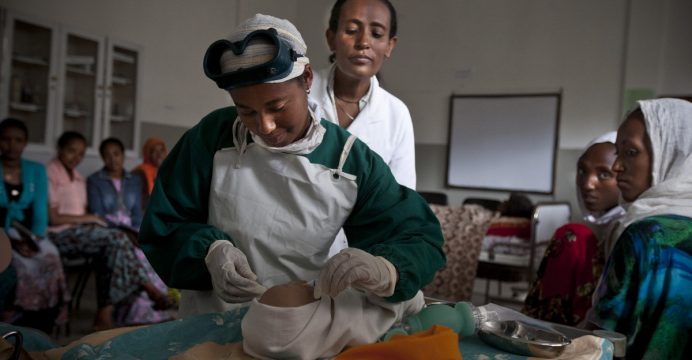 Under 5 deaths have halved since 1990, but slower progress on reducing newborn deaths

Worldwide, the number of deaths in children under the age of 5 has more than halved from 12.1 million in 1990 to 5.8 million in 2015, and the gap between groups of countries with the lowest and highest rates of child mortality is shrinking. Accelerated progress since 2000 is mainly as a result of tackling infectious diseases like malaria, diarrhoea and measles. However, the world fell short of the Millennium Development Goal (MDG) target to reduce child mortality by two thirds between 1990 and 2015, and some countries, particularly in sub-Saharan Africa, still have rates as high as 1074 per 1000 live births, suggesting they are unlikely to achieve the 2030 SDG target to reduce under-5 mortality to less than 25 per 1000 live births. One area that needs special attention is neonatal (in first month life) deaths which are falling more slowly than under-5 deaths and accounted for nearly half (2.6 million) of all deaths in children under 5 in 2015. Preterm birth complications and birth asphyxia and trauma are now the leading causes of deaths in children younger than 5 years worldwide, highlighting the slower progress in reducing neonatal conditions compared with communicable diseases in childhood. Over a third of countries worldwide still face substantial challenges to reduce neonatal mortality to fewer than 12 deaths per 1000 livebirths by 2030, especially in low- and low-middle income countries with Mali (40.6), Central African Republic (40.2), and Pakistan (37.9) recording the worst rates in 2015.