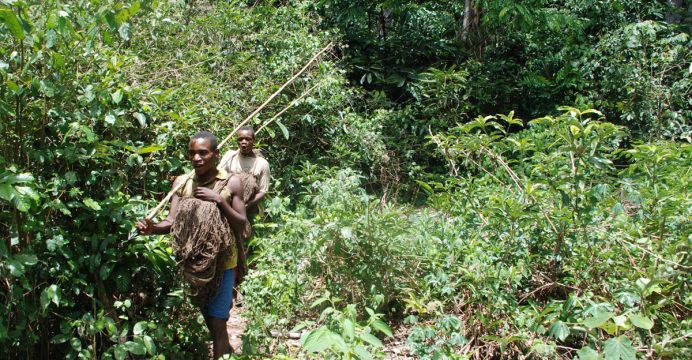 It is estimated that between 250,000 and 600,000 indigenous people live in the Congolese rainforest. The forest people, as they are collectively known, live as hunter/gatherers and trade with neighbouring farms. Many have never heard of diabetes.

“Unfortunately in forest areas, many people are dying from diabetes without knowing it,” says Herman Tuteene, a project coordinator for the Congolese NGO ADPMAC. “They do believe very much in witchcraft, so that they refer each case of sickness to witchcraft. According to them, no one can die without being bewitched.”
ADPMAC, an indigenous NGO specialising in health and education, wanted to change this. So they approached the WDF with a proposal for raising awareness about diabetes and its symptoms, and establishing a system for screening and referring villagers who needed diabetes care. They proposed a collaboration with RAPY, a network of forest people organisations, and CAPSA, a Congolese partner on WDF project 14-857, to ensure sustainability and integration with other efforts. The proposal became ‘To educate and sensitize forest communities of Kalehe, Kabare and Idjwi Island in regards to diabetes’, WDF15-1243. Neither the WDF nor ADPMAC had attempted to reach such a remote group before. In April, the experiment began.

Deep in the forest

It started with a trip deep into the forest. Three ADPMAC employees visited the villages in Kalehe, Kabare, and on Idjwi Island in Lake Kivu. Once there, they recruited 15 ‘sensitizers’, literate villagers who were then invited to a training workshop in the town of Bukavu.
The workshop took place on 15 to 17 June. Participants received a wide-ranging introduction to diabetes: how it affects the body, its risk factors and symptoms, complications – and how to prevent it through healthy eating and exercise. They also learned tactics for teaching their fellow villagers about the disease.
In July and August they headed back to their villages – and were welcomed by a population that was very interested in what they had to say.
“There were not many difficulties, according to the reports from the sensitisers,” Herman says. “Only that people wanted to become tested immediately! But that is for the second step of the project.”
The local health authorities were also supportive, he says: “For example, one doctor from Nyabibwe hospital said, ‘This is a good project because you will provide us with customers who will be referred to our services for testing and for healthcare services.’”

In fact, Herman says, the largest problems so far have been logistical – for example, sensitizers had to pack their own food on the long trips between villages. (“Some had to walk on foot 12 hours, but unfortunately we didn’t take that into account in our budget,” Herman says.)
Such challenges aside, the first phase of the project was a big success, Herman says.
“The project is welcome in the forest areas as well in towns because diabetes is killing many people nowadays. People need to become tested but they don’t have means to do so and there are no glucometers or strips in their nearest dispensaries.”
Herman and his colleagues are now focused on phase two: setting up testing points in the forest villages, and further raising awareness via radio, tv broadcasts and sensitisation sessions. It’s an important step towards reaching the project’s ultimate targets: 360 awareness sessions targeting at least 80,000 people, at least 120,000 people reached through 96 radio and tv broadcasts, and more than 6,000 people screened (Once people with diabetes are diagnosed, they will be provided with care and referral to the extent possible.)