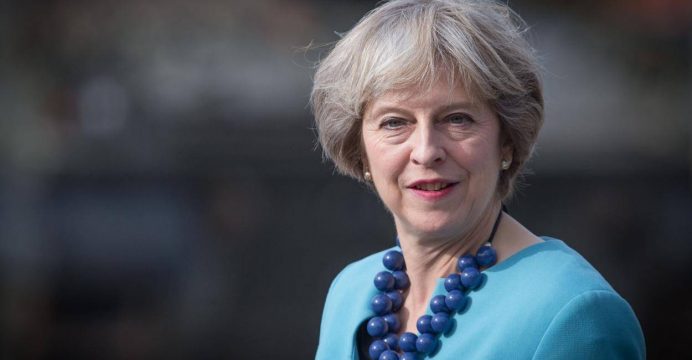 Prime Minister Theresa May said on Sunday she would trigger the process to leave the EU by the end of March, offering the first glimpse of a timetable for a divorce that will redefine Britain’s ties with its biggest trading partner.

Britain’s shock vote to leave the European Union in June propelled May to power and the former interior minister has been under pressure to offer more details on her plan for departure, beyond an often-repeated catchphrase that “Brexit means Brexit”.

In a move to ease fears among her ruling Conservatives that she may delay the divorce, May told the party’s annual conference in Birmingham, central England, that she was determined to move on with the process and win the “right deal”.

Using Article 50 of the EU’s Lisbon Treaty will give Britain a two-year period to clinch one of the most complex deals in Europe since World War Two, reports Reuters.

“We will invoke Article 50 no later than the end of March next year,” May told the conference to cheers from hundreds of members.

“Parliament put the decision to leave or remain inside the EU in the hands of the people. And the people gave their answer with emphatic clarity,” she added.

“So now it is up to the government not to question, quibble or backslide on what we have been instructed to do, but to get on with the job,” said May, keen to reassure lawmakers that she will deliver Brexit despite her earlier support, albeit quiet, for a “Remain” vote in the referendum.

Her comments were welcomed by the EU, with Donald Tusk, the president of the European Council, saying the statement had brought “welcome clarity” to the situation. But behind the scenes, there was frustration at the lack of detail.

“It is beyond comprehension that the politicians who campaigned for Brexit for months have no idea what they want, they have no plan at all,” a senior German official said.

Britain’s decision to leave the EU on June 23 sparked turmoil in financial markets as investors tried to gauge its impact on both the world’s fifth largest economy and the bloc.

The country’s allies fear that its exit from the EU could mark a turning point in post-Cold War international affairs that will weaken the West in relation to China and Russia, undermine efforts toward European integration and hurt global free trade.

Sterling plunged to a 31-year low after the vote and is now trading around 40 U.S. cents — or 25 percent — lower than the six-year highs it reached in mid-2014.

For some businesses, May’s reluctance to offer what she describes as a “running commentary” on her strategy, has deepened fears that they could end up paying higher costs if operating from Britain.

But May said she could not risk a good deal by putting her strategy under continual scrutiny.