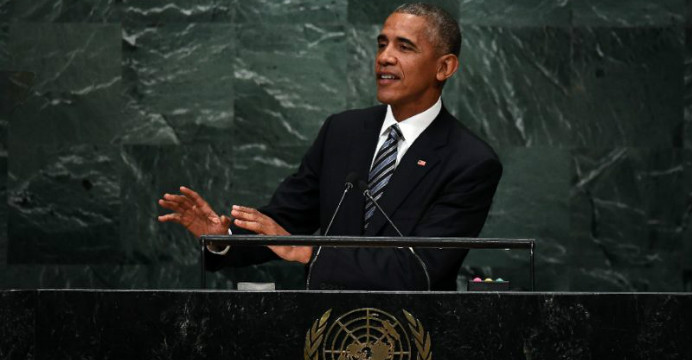 Obama told the UN General Assembly that democracy was a better path toward prosperity than the “crude populism” that is mushrooming in the United States and around the world, reports BSS.

“Some argue the future favors the strong man,” Obama said, in remarks sure to echo on the 2016 US campaign trail. “I believe this thinking is wrong.”

“History shows that strong men are then left with two paths: Permanent crackdown, which sparks strife at home, or scapegoating enemies abroad, which can lead to war.”

Obama’s comments come amid a scorched-earth campaign to succeed him, which has seen a wave of popular support for Republican Party nominee Trump, who holds far-right stances on immigration and national security.

“Our country has been weak. We’re letting people in by the thousands and tens of thousands,” the businessman said Monday, attacking Obama.

Obama challenged that thinking in his address at the UN, saying: “We have to open our hearts and do more to help refugees who are desperate for a home.”

“We have to imagine what it would be like for our family, for our children if the unspeakable happened to us.”

Obama admitted, however, that a “course correction” was needed to smooth the serrated edges of globalization and neutralize “alternative visions” promoted by populists and zealots.

He had a more direct message for his Russian counterpart, accusing Putin — who has invaded Ukraine and deployed forces to Syria — of trying using the military to gain global clout.
“In a world that left the age of empire behind, we see Russia attempting to recover lost glory through force,” Obama said.

Even as a Syrian ceasefire brokered by Washington and Moscow lay in tatters, Obama insisted diplomacy — not force — is the only way to end the brutal five-year conflict.

“There’s no ultimate military victory to be won, we’re going to have to pursue the hard work of the diplomacy that aims to stop the violence and deliver aid to those in need,” Obama said.

On Monday the Syrian military declared the ceasefire over and 18 UN aid trucks were destroyed as they tried to bring relief to war-ravaged citizens near Aleppo. Syria and Russia denied striking the convoy, with Moscow suggesting it may have caught fire.

LEGACY ON THE LINE

The Syria crisis, perhaps more than any other, threatens to sully Obama’s eight-year effort to improve America’s standing in the world.

Obama arrived at the White House in 2009 to find America’s reputation tattered by the war in Iraq and George W. Bush’s distain for global forums.

Obama has been more cautious — critics would say timid — with using US power, refusing to intervene to topple Syrian President Bashar al-Assad’s regime. Before the UN, Obama restated the case for multilateralism and an America that knows the limits of its own power.

“I’ve noticed as president times when both America’s adversaries and some of our allies believe all problems were either caused by Washington or could be solved by Washington.”

“Perhaps too many in Washington believe that as well,” he said to laughs from delegates.