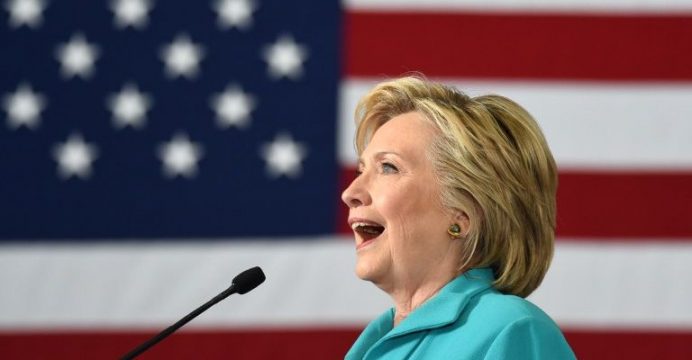 Hillary Clinton embarks on Monday on a campaign swing across battleground states, bringing traveling press aboard her plane for the first time as she seeks to regain momentum against her White House rival Donald Trump, reports BSS.

Clinton, the Democratic nominee, will attend events with working families in Cleveland, Ohio and Hampton, Illinois celebrating Labor Day, the US holiday that traditionally kicks off the fall campaign season and the fast-paced, two-month sprint to the November presidential election.

She then flies to Tampa Tuesday for a campaign rally at the University of South Florida, before traveling Thursday to Charlotte, North Carolina. Florida and North Carolina, like Ohio, are critical battlegrounds in the 2016 race.

Democratic presidential nominee Hillary Clinton will visit working families in Cleveland, Ohio and Hampton, Illinois as she starts her autumn campaign this week

Republican flagbearer Trump, 70, trails in polling but dominated the week’s political messaging and imagery, with his surprise trip to Mexico, a fiery immigration speech in which he embraced a hardline position on the issue, and his closely watched visit to an African-American church in Detroit.

“The polls are close so Crooked Hillary is getting out of bed and will campaign tomorrow,” Trump taunted Sunday on Twitter.

With just three weeks before the first of three presidential debates that are expected to be the most watched moments of the election, Clinton will seek to reassert herself Monday with multiple events.

She has been under sustained pressure to provide more access for journalists seeking to cover her every move, resisting the typical arrangement of a substantial traveling press corps sharing the same plane with a presidential hopeful.

But Clinton aides have said that beginning Monday she will debut a larger campaign jet and that reporters will be along for the ride. Also hitting the road are her running mate Tim Kaine and current Vice President Joe Biden, who stumped for Hillary in Pennsylvania, and her husband, former Bill Clinton, who attends events in Michigan and Ohio.

Trump to date has also avoided having the press corps travel on his plane. The provocative billionaire often takes questions from assembled journalists and is hammering away at his rival for failing to do the same.

On Sunday Trump’s campaign blasted out an email, stating “it has been 274 days since Clinton has held a press conference,” as part of a daily “Hiding Hillary” email series aimed at highlighting the Democrat’s aversion to pressers.

Trump and his running mate Mike Pence, Indiana’s governor, have stressed for months that Clinton should face journalists directly about her use of a private email account while she was secretary of state, a scandal which has dogged her for more than a year.

New revelations from notes released by the FBI from its July interview with Clinton about her email use showed that she said she did not recall specific training about how to handle classified information and that she was unaware that confidential material was marked with a “C.”

The FBI notes prompted Trump surrogate Rudy Giuliani, the former New York mayor, to accuse Clinton of acting with “criminal intent” with regard to her emails.

“Either she was the dumbest secretary of state in American history or a bald-faced liar,” Giuliani said in a statement released by Trump’s campaign.

Clinton for her part jabbed at Trump, after the Republican refused to answer questions on Philadelphia’s WPVI television about whether he regretted leading the “birther” movement that falsely claimed President Barack Obama was born outside the country.

“Astonishing that the Republican nominee still refuses to acknowledge that @POTUS was born in the United States,” Clinton tweeted Sunday.