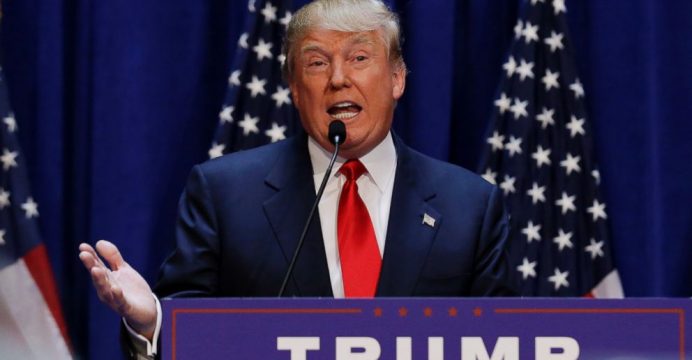 Republican presidential candidate Donald Trump struck a compassionate tone when addressing black churchgoers in Detroit on Saturday, part of a late bid to soften the edges of an abrasive presidential campaign weeks before the US election, reports BSS.

The visit to Great Faith Ministries International, in the heart of a city famous as a symbol of economic and urban decline, was his first to an African-American church, according to the pastor.

Trump has faced complaints of racial insensitivity, with his provocative anti-immigrant rhetoric, his false accusations that President Barack Obama was born outside the United States, and an aggressive America-first platform seen as catering to white voters.

While the Republican nominee called for “a civil rights agenda for our time,” he stopped short of outlining policy specifics on how to address inner city poverty and the challenges facing minorities.

“Our nation is too divided,” he said, setting aside his usual stridency, and adopting a humble tone.

He told the audience that he came to listen to their concerns, expressing sympathy for the out-of-work young men he had seen on boarded-up Detroit streets.

“Nothing is sadder than when we sideline young black men with unfulfilled potential, tremendous potential,” Trump said, speaking from notes.

“Our whole country loses out without the energy of these folks. We’re one nation. And when anyone hurts, we all hurt together,” he said.

Trump was received courteously and rewarded with occasional bursts of applause as he set about trying to allay the deep skepticism of African-Americans who have swung overwhelmingly behind his rival, Hillary Clinton.

Blacks account for 12 percent of the US electorate, and Trump, who trails in the polls with 66 days before the election, recently has sought to broaden his appeal.

DEVIL’S IN THE PULPIT

“The devil’s in the pulpit!” shouted Wyoman Mitchell, one of several dozen protesters who were pushed back by horse-mounted police and other officers in the tense encounter.

“He’s never come to our rescue,” McGowan said. “Why are we supposed to believe him now?”

Church pastor Bishop Wayne Jackson had invited New York billionaire Trump to attend the fellowship service. Trump sat for an interview with the pastor that will be aired Thursday, according to Jackson’s Impact Network.

He also took a short tour with Ben Carson, a retired African-American neurosurgeon, and former Republican presidential rival, who showed Trump the modest Detroit home in which he grew up.

“What do you have to lose?” he posed nearly two weeks ago, rhetorically addressing African-Americans in a speech before a white audience in Ohio.

Trump has been faulted for largely ignoring the black community during his campaign. But in Detroit, he extolled black contributions to America and the moralizing force of black churches.

“I am here today to listen to your message and I hope my presence here will also help your voice to reach new audiences in our country,” Trump said.

“We talk past each other, not to each other and those who seek office do not do enough to step into the community and learn what is going on.”

The African-American electorate traditionally leans heavily Democratic, and Detroit has the highest percentage of black residents — more than 80 percent — of any large US city.

Many neighborhoods have been hollowed out by decades of “white flight,” in which Caucasian families left downtown and midtown for more affluent suburbs.

“If you want to be sincere, tell us specifically what you’re going to do, and that’s what we’re still waiting for,” Duggan told CNN.

Small business owner and Trump backer Carletta Griffin was in the church, and said his compassion was “genuine, it was authentic, and it was warm.”

Fellow African-Americans need to “change the lens in our perspective,” she said and recognize Trump’s sincerity. But Denaria Thorn, who also attended the service, said she remained opposed to Trump and had been “expecting an apology” for harsh rhetoric he has delivered in the past.

“He has a whole lot of making up to do,” Thorn said.

Trump critics have accused him of flirting with racism and embracing positions that have lured white nationalists to support him, including former Ku Klux Klan leader David Duke.

Clinton has noted that as a young developer, Trump was sued for failing to rent to black and Latino tenants, and by black employees of his casinos.