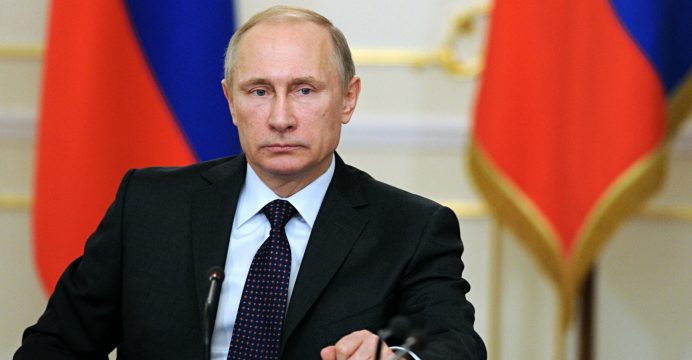 Russia is keen to resolve a territorial dispute with Japan, says Putin﻿

Russian President Vladimir Putin said Moscow was keen to resolve a territorial dispute with Japan ahead of talks on Friday with Prime Minister Shinzo Abe, although a solution appears far off, reports BSS.

Tokyo-Moscow relations are hamstrung by a row dating back to the end of World War II when Soviet troops seized the southernmost islands in the Pacific Kuril chain, known as the Northern Territories in Japan.

“We are not talking about some kind of exchange or some kind of sale,” Putin said in an interview with Bloomberg News.

“We are talking about finding a solution where neither party will feel … defeated or a loser.”

Russian President Vladimir Putin (right) shakes hands with Japanese Prime Minister Shinzo Abe during a meeting on the sidelines of the Eastern Economic Forum in Vladivostok on September 2, 2016

The tensions have prevented the countries from signing a peace treaty formally ending wartime hostilities, hindering trade, and investment ties.

Putin said that signing a peace treaty with Japan was a “key issue” and that Moscow “would very much like to find a solution to this problem with our Japanese friends.”

Abe’s visit to Russia — his second this year — comes days after the Kremlin announced that Putin will travel to Japan in December, his first trip to the country since 2005.

Over the years, leaders from the two nations have tried to make headway on resolving the row but a solution has proved elusive.

Both sides have confirmed that the disputed islands will be addressed in Friday’s talks, taking place on the sidelines of an economic forum in the far eastern Russian city of Vladivostok.

“I’m resolved to make progress on the peace treaty and territorial issues by holding candid and thorough talks with President Putin,” Abe told reporters before he set off for Vladivostok.

Experts view recent rapprochement efforts as a positive development for Moscow’s trade ties with stalwart US ally Tokyo but doubt that they will result in a resolution of their territorial dispute.

“The two parties are likely to show that they are in favor of a peace treaty but will try not to publically express their disagreements about the Kuril islands,” Russian political analyst Konstantin Kalachev said.

“Japan is not ready to drop its claims to the islands and Russia will by no means recognize them.”

Foreign minister Lavrov said earlier this year that Russia wants to “move forward” its ties with Japan but is not prepared to budge on the “result of World War II”.

Russia has angered Japan recently by building new modern compounds for its troops stationed on two of the disputed islands.

Prime Minister Dmitry Medvedev infuriated Tokyo last year when he visited the islands, which are home to some 19,000 Russians.

Kremlin spokesman Dmitry Peskov said ahead of the talks that the territorial dispute was “far from the main issue on the agenda”, adding that efforts to boost trade ties would be their main focus.

Japan joined the US and EU to slap sanctions on Russia over its meddling in Ukraine, further hindering its already modest trade with Moscow.

Bilateral trade between the countries last year fell by 31 percent to $21.3 billion (19 billion euros), in part due to the punishing economic measures by Japan.

Kremlin aide Yury Ushakov told reporters that in spite of the sanctions imposed by Tokyo, the Russian market remains “of great interest” to the Japanese business community.

Abe is traveling with a large delegation that will discuss a wide-range of economic issues with senior Russian officials, including Foreign Minister Sergei Lavrov, Energy Minister Alexander Novak, and Industry and Trade Minister Denis Manturov.

During his visit to Russia’s Black Sea city of Sochi in May, Abe proposed an eight-point economic cooperation plan with Russia that focused on energy, agriculture and industrial production.