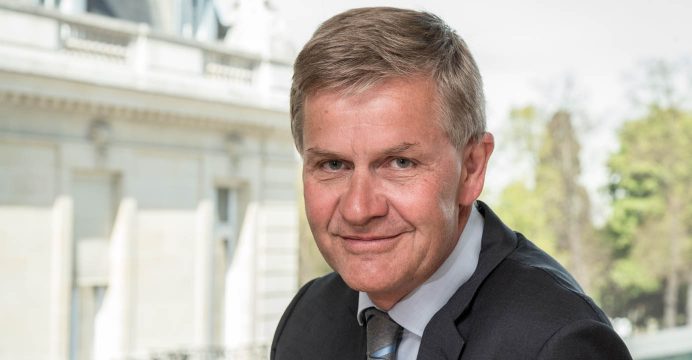 UN Environment Chief Erik Solheim concluded on Tuesday a two-day visit to Addis Ababa, Ethiopia, where he met with officials of the Government of Ethiopia, heads and representatives of key regional institutions as well as strategic partners in the region.

Mr. Solheim’s visit to Ethiopia, his first mission in Africa since taking the helm of UN Environment, was an opportunity to reiterate UN Environment’s support for the region, and to enhance cooperation with the African Union and other partners towards the swift implementation of Sustainable Development Goals and the Paris Agreement on Climate Change.

Meeting with Prime Minister Hailemariam Desalegn, Mr. Solheim reiterated UN’s support for Ethiopia’s efforts to increase its forest cover and to green its economy. He commended the country’s significant investments in renewable energy and encouraged Ethiopians to share their experiences with the rest of Africa. Mr. Desalegn requested further UN Environment support on sustainable chemicals management.

Speaking with the African Union’s Chairperson, Mme Dlamini Zuma, Mr. Solheim reaffirmed UN Environment’s support for Africa’s efforts to achieve the Sustainable Development Goals and the continent’s Agenda 2063, stressing the centrality of environment to both agendas. The leaders discussed strengthening collaboration to address the continent’s major environmental issues, such as air quality, loss of biodiversity, illegal trade in wildlife and environmental degradation during conflicts. Mme Zuma thanked UN Environment for its input to the operationalization of the African Renewable Energy Initiative and requested continued support for the initiative.

At a meeting with the African Diplomatic Corps, Mr. Solheim emphasized the role of diplomacy in enabling progress on the continent and urged the diplomats to do more to empower governments and businesses to fast-track growth and sustainable development in the continent.

Meeting with the Head of UN Economic Commission for Africa, Dr. Carlos Lopes, Mr. Solheim noted that full integration of environment and development is a core focus of his mandate and added that UN Environment is keen on supporting Africa’s industrialization through environmentally friendly investments and initiatives.

Mr. Solheim concluded his stay by visiting one of Africa’s largest wind farms – the Adama II Wind Power Project. Built by a Chinese company and operated by Ethiopian engineers, the wind farm has a capacity of 153 megawatts.