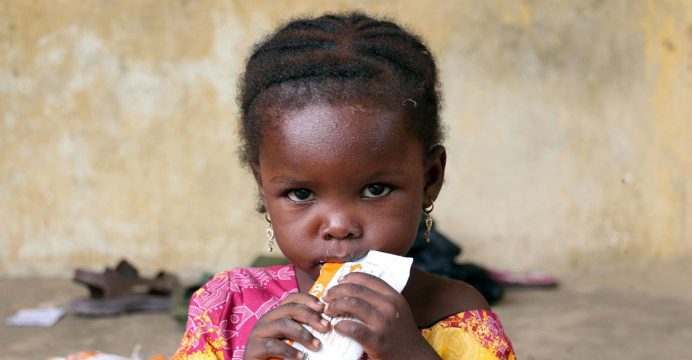 The number of people in need of food assistance in north-eastern Nigeria has risen to 4.5 million, nearly twice as many as in March, according to a mid-August analysis (Cadre Harmonisé) by various agencies including the UN World Food Programme (WFP).

A worsening economy could see this figure rise by a further million as early as next month. A separate food assessment by WFP has warned of soaring prices in areas affected by the Boko Haram insurgency.

“The news comes as in the past days alone, tens of people have been killed or injured in Nigeria and in neighbouring Chad, Cameroon and Niger – an indication that Boko Haram violence is set to keep pushing more people into hunger and suffering,” said Abdou Dieng, WFP’s Regional Director for West Africa.

According to the Cadre Harmonisé, the number of people struggling with severe food insecurity has risen fourfold since March to over one million (distributed across Borno, Yobe and Adamawa States). This level of food insecurity is classified as ‘emergency phase’: people generally require food assistance to survive. More than 65,000 people – located in newly liberated but still inaccessible areas in Borno and Yobe – are estimated to be facing famine-like conditions.

“All indications point to an extremely grave situation. As the rains set in and the lean season deepens, and more areas are opened up to access humanitarian aid, the full scale of hunger and devastation is likely to come to light,” Dieng added.

The situation remains fluid, with more people uprooted in areas where fighting goes on. Some formerly displaced people are meanwhile returning to find their rural homes uninhabitable: forced to stay in urban areas, they are entirely reliant on external assistance. Further burdened with spiralling inflation, families are having to beg, run up debts or skip meals to survive. Many are reduced to consuming low-nutrient foods – and then, only once a day.

WFP is scaling up its response, aiming to reach over 700,000 people with food and cash assistance in the coming months. This will include specialized nutritious food for 150,000 children under age five. Much of it, as well as medicines, vaccines and medical equipment, is being delivered through the WFP-managed United Nations Humanitarian Air Service, frequently used by the wider humanitarian community.

WFP requires US$52 million to continue providing life-saving assistance until the end of the year in north-eastern Nigeria.